Yorkshire Moors Give Up a Big Secret 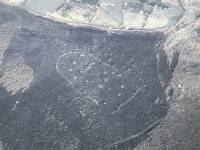 This is a "wow" article! (Aerial photograph, from article) From the scarborougheveningnews.co.uk Moors give up ancient secret Published Date: 31 December 2009 By John Ritchie ARCHAEOLOGISTS have snapped the first picture of an ancient monument on the North York Moors near Scarborough which could date back more than 4,500 years to neolithic times. Aerial surveyors from English Heritage recently flew two sorties over moorland near Goathland after a wildfire swept across 62 acres revealing the full extent of a prehistoric stone enclosure and multiple stone cairns. The blaze struck in early October, but caused no lasting damage to the environment. However, it gave experts their first view of the scheduled monument which measures about 485ft by 246ft.The area has been managed sensitively for wild red grouse, preserving the site for future generations. Although the site was previously plotted on maps, remarkably little information existed about its date or purpose because it has been concealed by a protective blanket of heather. Now some of its secrets could be unlocked. David MacLeod, senior investigator with English Heritage’'s aerial survey team, said: “It’s always exciting to see something like this clearly for first time. “We were called in by the North York Moors National Park Authority to capture aerial views before the site is recovered by vegetation. “We saw at least 20 cairns of varying size, taking pictures from various angles allowing us to set the site in a wider landscape context. “Establishing what the monument was used for is a tricky question.“The walls are low now but could have been much higher so possibly it had an agricultural purpose acting as a pen to keep cattle or sheep. “We can’t rule out a ritual significance – perhaps we are looking at a graveyard? “Whatever its origins, it stands as reminder that the history of North Yorkshire is far from done and dusted, but is still being written.” Spurred on by the aerial images, the National Park commissioned experts from Wessex Archaeo- logy to undertake a ground survey to plot the various features. Their report is due in the new year.Graham Lee, North York Moors National Park Authority archaeologist, added: “Dating the site is fraught with difficulty, but it’s just possible it could be 4,500 years old, or date back even further. “To put this into context that’s before the pyramids and Stonehenge were built. “The site shows signs of later activity too, notably in the Bronze Age and also in the 20th century, with some evidence of stone removal. “A similar site has been recorded on Fylingdales Moor, which was also revealed after a much larger moorland fire in 2003. This is also thought to possibly be neolithic in date. ”The New Stone Age (neolithic period) lasted from around 4,000BC to about 2,500BC, during which the population increased and early forms of agriculture began to be adopted. “These early farmers were the first to destroy the forest cover of the moors. “They grew crops, kept animals, made pottery and were highly skilled at making stone implements. However, little is known about their beliefs as no language or written evidence survives. “It’s possible the cairns at the site near Goathland could be ‘gravestones’ for the ashes of folk who died thousands of years ago.”The full article contains 58 words and appears in Scarborough Evening News newspaper.-->
Posted by Jan at 6:15 PM