Article.
By ANDREW KHOURI, Associated Press Writer
Tue Jun 29, 1:57 pm ET
LONDON – An exhibit that combines X-rays, microscopy, and Botticelli opens this week at The National Gallery, detailing how scientists and others have unraveled some of the art world's mysteries.

The exhibit, "Close Examination — Fakes, Mistakes & Discoveries," shows how techniques such as infrared imaging, X-rays and mass spectrometry were used to properly attribute works of art and sniff out forgeries. Art historians and conservators have also contributed to the effort.

Among the more than 40 paintings on show is "The Virgin and Child with an Angel," which was acquired by The National Gallery in 1924 and attributed to Italian painter Francesco Raibolini, known as Francia.

But a 2009 investigation unmasked the painting a fake, finding that the underdrawing was done in graphite pencil — an instrument not available to the Renaissance painter. 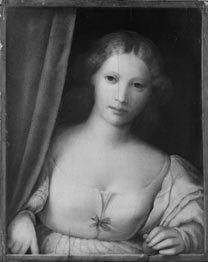 The exhibit also explores how paintings evolved over time. "Woman at a Window," a 16th century work by an unknown Italian artist, was altered to reflect the prudishness of the Victorian era [image, right, before restoration in 1978]. The woman, originally a blond with a seductive gaze and a revealing bodice, was transformed into a brunette with more modest dress and a reserved expression. [See A Blonde's Dark Secret.]

When the gallery discovered the change during cleaning in the late 1970s, it removed the new layers of paint and the woman's racy look was restored.

While the experts' work through the years has shown that once-prized paintings were fakes, it's also made previously obscure work more prominent.

The 15th-century painting "Saint Francis of Assisi with Angels," was thought to be painted by a pupil of the Italian master Sandro Botticelli. But, after cleaning and restoration in 2002, the gallery now attributes the painting to Botticelli himself.

Betsy Wieseman, co-curator of the exhibit, said such discoveries take time, but are rewarding.

"You know it doesn't happen in an instant. It is a much slower process, but there often does come that moment when your heart goes pitter-pat, and you suddenly think 'Oh my goodness this is not what I thought it was going to be.'"
Entry to the exhibit, which opens Wednesday, is free and runs until Sept. 12.
Date and time