The eyes of the Goddess are always upon us... 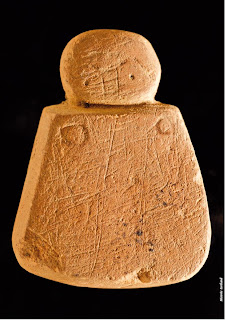 An ARCHAEOLOGICAL dig where the Orkney Venus was found last year has entered an "exciting phase" as excavations resumed.

Archaeologists hope the Links of Noltland dig will reveal more about people who lived on the Orkney island of Westray thousands of years ago.The sand dunes protecting the area have been reduced by winds over the past few decades.

Yesterday project manager Richard Strachan, an archaeologist with Historic Scotland, said: "The project is reaching a very exciting phase, as we race against the wind to recover the archaeological remains of the extensive settlement extending for about 1,000 years from the late Neolithic to the Bronze Age.

"We are concentrating on defining the enigmatic and unique cattle skull building uncovered at the end of last season."

The Orkney Venus is the earliest carving of a human figure found in Scotland.

From Heritage Key:
Archaeologists On Orkney Come Face-to-Face With A Neolithic Scot
Submitted by MalcolmJ on Thu, 08/27/2009 - 14:09

Also from Heritage Key:
Orkney Venus And Holm of Papa Westray Lintel Stone Could be Sisters
Submitted by MalcolmJ on Thu, 09/17/2009 - 19:18 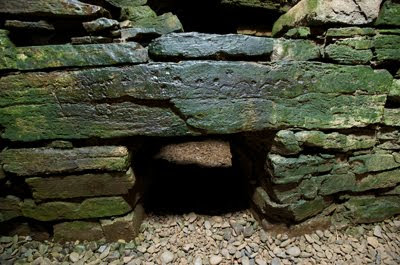 Do you see the eyes of the Goddess in the lintel stone?  These remind me of other neolithic 'bird goddess' eyes I've seen.
Posted by Jan at 10:31 PM