The early peoples in China used certain types of animal bones as well as tortoise shells for divination.  As far as I known, the practice had it roots during the Shang Dynasty.  The area generally associated with the Shang in modern-day China is depicted in the map to the right.

A chronology from about.com:

The Bronze Age Shang Dynasty in China is roughly dated between 1700-1050 BC, and, according to the Shi Ji, it began when the first Shang emperor, T'ang, overthrew the last of the Xia (also called Erlitou) dynasty emperors. They in turn were overthrown by the first rulers of the Zhou Dynasty, in 1046 BC.

Archaeological evidence for the Shang Dynasty suggests that the story is far more complex and that the use of the term 'Shang dynasty' or 'Shang civilization' is confusing, and 'Shang period' might be of more use. Settlement patterns of the Shang period include dispersed villages like Taixi, walled settlements like Gucheng and Zhengzhou, and ritual or ceremonial centers like Erlitou and Anyang.

Important advances of the Shang Dynasty are the creation of writing, on oracle bones, bones and turtle shells used to record dreams and public and private events and sacrifices. Ritual bronzes were first created at Erlitou, which may or may not represent the early part of the Shang Dynasty, depending on which scholar you listen to.

As you can see from this map of the area of the Western Zhou Dynasty, the area in China is basically the same.  Information from paulnoll.com: 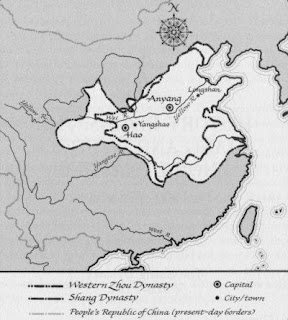 A chieftain of a frontier tribe called Zhou, which had settled in the Wei Valley in modern Sha'anxi Province, overthrew the last Shang ruler, a despot according to standard Chinese accounts. The Zhou Dynasty lasted longer than any other, from 1027 to 221 BC (807 years). It was philosophers of this period who first enunciated the doctrine of the "mandate of heaven," the notion that the ruler (the "son of heaven") governed by divine right but his dethronement would mean that he had lost his mandate. This doctrine explained and justified the demise of the two earlier dynasties and at the same time supported the legitimacy of the present and future rulers. In 771 BC, the Zhou court was sacked, and its king killed by invading barbarians who were allied with rebel lords. The capital was moved eastward to Luoyang. Because of this shift, historians divide the Zhou era into Western Zhou (1027 to 771 BC) and Eastern Zhou (770 to 221 BC). With the royal line broken, the power of the Zhou court gradually diminished; the fragmentation of the kingdom accelerated. Eastern Zhou divides into two sub periods. The first, from 770 to 476 BC, is called the Spring and Autumn Period, after a famous historical chronicle of the time; the second is known as the Warring States Period (475 to 221 BC).
Article from National Geographic News: 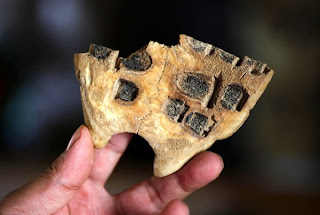 A broken tortoise shell found at the Luoyang excavation site was likely used for psychic practices thousands of years ago.

Not much is known about tortoise-shell divination during the Western Zhou period, Sena said, but during the preceding Shang dynasty, the process involved heating the shell and interpreting the cracks that formed.

"Holes are bored in the back of the shell to make it easier to crack during the divination process," Sena explained.

"Someone then 'reads' the cracks. We don't know how exactly—it may be the shape of the crack or the sound it makes when it's heated," he added.

"The diviner would ask a question and the crack provided an answer."
Posted by Jan at 11:28 AM