From the RutlandHerald.com
Artifacts dating back to 5000 B.C. found in Rutland Town
By PATRICIA MINICHIELLO
STAFF WRITER - Published: June 24, 2010 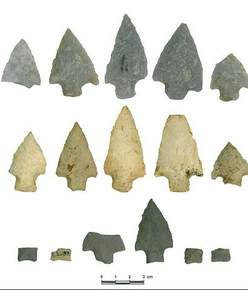 Ancient artifacts dating back roughly 7,000 years ago to 5000 B.C., were found by state archeologists on land near Thomas Dairy in Rutland Town recently.

John Thomas, one of the landowners, said the pointed projectiles looked like arrowheads and were discovered in at least two different locations on his property. (Image: The photo depicts 16 projectiles dating back to 5000 B.C. found on land near Post Road in Rutland Town owned by Orin Thomas and Sons.  Northeast Archaeology Research Center)
“One was close to Carey’s Auto and another abuts the development on Blue Ridge acres,” Thomas said Tuesday.

The discovery occurred as a part of an archeological dig — a standard procedure prior to subdivision — by the Vermont Division for Historic Preservation.

Scott Dillon, a survey archeologist with the division, said 16 projectiles were found at one location and appeared to be intentionally buried together in a pit. He said the relics studied by experts from the Northeast Archaeology Research Center Inc. were from the Native American era.

“These findings are quite rare and priceless. They really paint a picture of people living in the Rutland area 7,000 years ago.”

“They would heat up rock and drop the rock into the pot to heat up the food,” Dillon said of the Native American people who used these tools. When asked how much these items are worth, Dillon would not put a price tag on them.

After the discoveries were made, the state created buffer zones around the sensitive material and put a restriction on the land for anything but agriculture use.

Despite the buffer zone determination, four lots on the Thomas property were subdivided, a portion of which will soon be sold to the federal government to build a 70,000-square-foot Armed Forces Reserve Center.

On Tuesday, an Act 250 permit was granted for the Thomas subdivision, according to Bill Burke from Rutland’s Act 250 office.

Regarding the artifacts, Thomas said although the findings are not a financial burden yet, he feels they could be in the future.

“Anytime anyone encumbers the land, I feel that it could be a problem or expense very easily,” Thomas said.

When asked how he feels about the discovery of ancient relics on his land, Thomas answered bluntly.

“I feel that if these historic preservation people want to preserve these artifacts, they should put them in a museum and leave me alone.”

They are dated to around 7,000 years AFTER the peopling of North America, at the very minimum, and so I'm not sure how relevant they are in terms of discussing Aurignacian technology...?

To Anonymous on 10/18, what I'm wondering is whether there was a "continuation" (don't know the exact word to use) of culture from, say, those original settlers who used the Aurignacian style/technology. Or is there no relation at all? I know there is a large gap in time between the dates -- so my query is whether there is evidence that points to a continuum or whether there were sharp breaks in culture and technology and long absences of man on the east coast of North America?