"Double" Temple to Venus and Roma Reopen in Rome 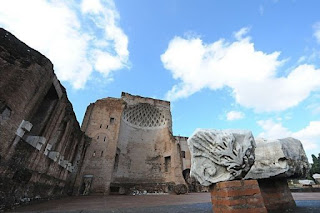 ROME — The biggest temple of ancient Rome reopened to the public on Thursday after nearly 30 years amid heavy criticism of Italy's management of its artistic heritage after the collapse of a house in Pompeii.

"We're restoring to Rome one of the most important symbols of the power and greatness of the Roman Empire," Claudia Del Monte, the architect in charge of repairing the Temple of Venus and Roma, told AFP at the opening.

Designed by the Emperor Hadrian in the 2nd century AD, the shrine occupies a large area in the Roman Forum -- one of Italy's most popular tourist sites.

The temple, measuring 106 metres by 48 metres (348 feet by 156 feet), once had dozens of columns flanking an enormous nave and a coffered vaulted ceiling.

Only 16 of the original white marble columns are left standing.

The temple site was used as a car park until the 1980s and has been undergoing intermittent restoration work since then.

Erected on the remnants of Emperor Nero's villa, the temple had two main chambers arranged back to back, each containing a giant statue -- one of Venus, the goddess of love, and the other of Roma, the goddess of Rome.

The cult of Venus played an important role in many Roman religious festivals and myths and Julius Caesar claimed the goddess as an ancestor.

Roma faced west to look out over the Forum, while Venus looked out over the Colosseum, with majestic staircases leading down to the ancient arena.

Historians say the orientation of the two statues represented the unity between Rome's past and present, between the Orient and the West.

"We've worked meticulously to restore every single stone of the temple that remains, cleaning away the smog and filth caused by years of urban misuse," said Del Monte, who began working at the site in the early 1980s.

"When we began restoring the stucco we found traces of gold leaf that would have adorned the apses above the statues. Though the sculptures have long been lost, we've done our best to return the temple to its former glory," she said.

Also visible to the public are the detailed carvings on the apses and some of the restored patterned floor, as well as parts of the temple preserved inside a Catholic church built over part of the site.

Del Monte said that elements of the restoration -- such as pinning together parts of the apse that were cracking -- would not have been necessary had the ancient site been better cared for.

"Italians need to be aware of their patrimony and stop abusing it," she said.

Italy is currently gripped by a tense debate over the future of heritage and cultural sites, as the sector faces severe funding cuts and critics blame the government for failing to protect historic monuments from ruin.

Hundreds of museums, libraries and historic parks are set to close across Italian cities on Friday in protest against the cuts -- a debate that has become inflamed after the House of Gladiators collapsed in Pompeii last week.

"This monument should be the envy of the world, but it was completely abandoned and left in the most degraded state," Francesco Maria Giro, Italy's junior culture minister, said at the temple opening.

The collapse of the ancient Roman house in Pompeii has provoked outrage and calls for Culture Minister Sandro Bondi to resign.

"Unfortunately these are very fragile archaeological areas, they're extremely old, in a chronically bad state in parts, so there is always risk problems will crop up," Giro said.

"The area that collapsed recently had been identified as an area at risk, but not an emergency," he said.

"The problem is not the collapse in itself, it's the degradation. We all need to examine our consciences," he added.

Though closed to the public until now, the temple has been used since John Paul II's papacy as a platform for Good Friday ceremonies when the pope leads pilgrims in meditations on the Stations of the Cross.

Construction of the temple began in 121 AD, and it was officially inaugurated by Hadrian in 135.

Labels: Temple of Venus and Roma