I just watched the most fascinating PBS special about women mathematicians who worked on top secret projects for the U.S. Army in during WWII.  In addition to the mind-blowing intelligence and skills these women brought to pre-computer computing (indeed, people who did the sorts of calculations these women performed were called "computers"), beginning pay was around $1,260 a year, great wages at the time, and top pay was around $2,000 a year - unheard of wages for a lot of people back then, not to mention a female! 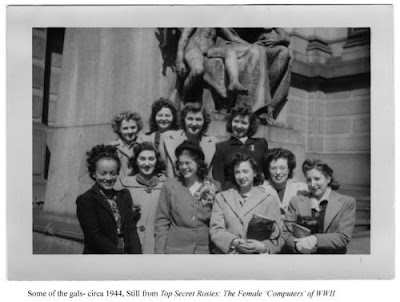 While these women were working on ballistics calculations and code-breaking, a team of engineers at the University of Pennsylvania was developing the first electronic "computer" - the ENIAC - not sure I've got the initials correct but that is what it sounded like in the television show.  Guess who the first programmers of the ENIAC were - the women!  But publicity photos from after the war and stories written about the development of the ENIAC at the time (by male reporters) left them totally out of the picture - literally!

These women were from all walks of life, all religions, and all races.  Many of them are dead now, veterans of the WWII war effort.  Every single day more and more of these veterans pass on, soon, there will be none left.  I am so happy that this project was realized and this great story is available on DVD so that in the future people will be able to see what these women did, despite not receiving the recognition they deserved for their accomplishments.  That was then - people did what they had to do in order to win the war, and no bones were made about who got credit for what.  But now we are able to know the full story.

PBS offers a DVD of the excellent program on the female mathematicians who blazed the way into the computer age, and I understand starting in 2011 you will be able to "rent" it by download at Amazon.com.

Ahhhh, I see Wikipedia has an entry for the ENIAC (I had it spelled with two Ns so I changed it above) that contains two photos showing women programmers at work.

Cool photo published by the BBC from 15 November 2007, showing three women working on programming the ENIAC.
Posted by Jan at 4:29 PM

I have known about this since I was a child, and in great detail. My mom was a Top Secret Rosie.

Holy Hathor! Hello Ms. Swack. Thanks for dropping by and commenting. I have SOOOO much admiration for these women -- unsung heroines, that is what they are. The entire world should know more about what they did and how they did it. Would you care to share more about your Mom?