Catching Up -- What's Going on in Egypt!

I haven't abandoned the blog - I've just been so enthralled by what's been going on in Egypt -- and I've taken on a new family tree research project for a friend of a friend -- and today it's WARM outside.  Absolutely amazing - FINALLY above 32 degrees F!  After an early hike and back to the supermarket to stock up on essentials (wine, bread, meat, and nuts for the squirrels) I've been busy -- and the Christmas tree is still up, I haven't even attempted to start the project that is taking it down!

So - in between bouts of working on this new family tree, and heaving tremendously huge blocks of snow (fortunately rendered maleable due to the temperature) over my shoulder in an attempt to at last clear my driveway of the accumulation from the Great Blizzard of 2011 -- working in shifts -- I'm taking a break now.

Ancient Egypt was a land of goddesses.  I often wonder what happened in that twilight time between the "official" closing of the last temples in the 400's CE by orders of the Holy Roman Emperor who was, by that time, a nominal "Christian," and the 600's CE invasion by and takeover of Egypt by the Muslims and their new, fierce god, Allah, who was just a retred of the tired, old storm god of the Israelites, Yahweh.

Christianity did have a bulwark in Egypt, in the form of the Copts who, with their language, kept alive a link to the old hieratic form of writing, which was a "shorthand" for the even older hieroglyphics. A continuous chain to the ancient past. The Holy Mother Isis, and the creator-goddess Hathor (and perhaps the "archaic" creator-goddess, Neith), found much common ground with the Christian concept of the Holy Mother Mary.  And so, perhaps, the Egyptians of the time gave a new gloss to their old beliefs.  The Egyptians were very good at adopting and adapting foreign deities into their own religious pantheon and inconography.

Then, Islam came and presumably swept all away before it.  But - not quite... At the root of Islam (not talked about - perhaps not even generally known by the average Muslim)  is another ancient Mother Goddess - al-Alat.  And those Coptic Christians, they never went away, either.  They are still there -- a minority, to be sure, persecuted, to be sure.  For shame - Shame, Shame on the Egyptians of today for forgetting the lessons of their ancient and glorious past!  Tolerance - tolerance, acceptance, incorporation.  In ancient Egypt, there was room for all gods and goddesses.

I don't know about you, but since the first outbreaks of protest marches in Egypt on January 25, 2011, I have been feverishly following the news and praying incessantly for those brave souls, just as I prayed incessantly for the brave souls in Iran in 2009, who were marching also - then - for freedom.  Interesting, isn't it, that Freedom is not a god, She's a Goddess.  She is a Mother - nurturing, protective, fierce when She needs to be.  Determined.  She Never Gives Up.

I followed the news online and on BBC news and other news shows on PBS on television over the last two plus weeks.  As the days went by, I got more and more wrought.  What would happen?  Reports were streaming in of people being killed by security forces and "unknown snipers" who were, presumably, also security forces of the Egyptian government.  Upwards of 500 people were killed during the - euphemistically called "unrest."  Yes - unrest.

It brings me to tears just thinking about it.  People - today - dying for Freedom.  Let them not be forgotten. I do not know any of their names. I pray that their names will become known to all.  I pray that out of the new Egypt that emerges from the ashes of the old, a monument will rise to those people who were killed, and we the world over will be able to see their names, someday, engraved in stone that will last for 10,000 years, and more. 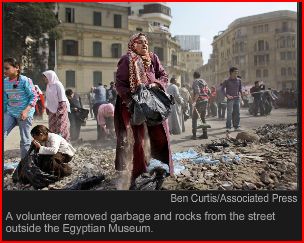 What will happen next?  I don't know - no one knows. Egypt, that most ancient land, has embarked upon a journey to a brave new world.  Let us all pray for her.  In the meantime, Egypt's people are stepping forward to help clean-up after days of confrontation, stress, hope and anger, and hope again and, predictably, no regular garbage pick-ups. Let us hope the new Egypt can fix their bureaucracy :)  For some reason, this photo (from The New York Times) gives me hope.

Maybe, after all,  I will get to take that trip to see the Egyptian Museum before I'm too old and decrepit.  But not this year, darlings.  Not this year.