The first game was today.  I've made no bones about the fact that I think the format sucks, big time.  I believe it gives an advantage to the higher-rated players who are now basically just playing two separate mini-tournaments. It also leads to "strategic" draws rather than fighting chess.  Personally, I do not belief that this is the way to determine Championship titles. The U.S. Chess Championships, which are supposed to be the premiere and most prestigious events in the United States, have devoled into horrid "knock-out" tournaments.

Nakamura bowed out of the Championship this year.  Gee, I wonder why?  I'm sure there's a credible excuse - prior commitment, blah blah :)  Good to see Kamsky back to defend his title, I wish him luck.  I think he's a player with a lot of heart, and I like him, even though he's lost a lot of hair. 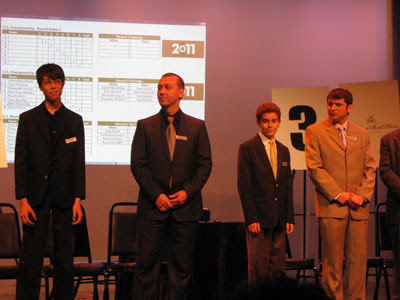 I love this photograph of some of the male players from the pre-game gala.  GM Ray Robson (far left) has sprung up so much, ohmygoddess!  He is now a lanky young dude instead of the boy I remember from just a few years ago.  How quickly time flies.  GM Robson must drink a lot of milk, the way his bones have stretched out. Wow. Robson has totally outgrown his suit - he needs a new one!  I probably sound like his mother now, LOL!  I hope he wins big money and springs for a few really smoking hot suit coats!  By the way, that's GM Gata Kamsky, reigning U.S. Chess Champion, next to Robson.  IM Daniel Naroditsky and GM Yury Shulman round out the four players from left to right. This photo is by FM Mike Klein from the USCF website.  Naroditsky, along with Robson, is another exciting young U.S. player to watch.

My focus is the Women's Championship, but I'm finding it incredibly difficult to drum up enthusiasm for this new chamionship format.  To my way of thinking, fans won't have to pay any attention to the early games, just to the final four - like watching the last minute of an NBA game. And - really - what kind of measure of relative playing strength does such a format provide?  Not much, I think.  Too much chance for results to be the result of "luck of the draw" instead of going head to head with every other player.
Susan Polgar posted coverage on the big pre-game gala that took place last night and the pairings for the first game.  Game 1 (Women):

The offical website where you can see live games, etc.

Who will the winner of the Goddesschess Fighting Chess Award be?  Foisor's win behind the black pieces against stalwart player Krush (who was the youngest player ever to win the U.S. Women's Chess Championship title when she was just 14) was a shocker, but Foisor has hung tough in her prior appearances at the U.S. Women's Chess Championship.  I have often felt that Foisor's results did not adequately reflect the effort she displayed on the board.  Is she this year's "sleeper?"  No way of knowing under this new format.

Tatev Abrahamyan, multiple winner of prior Goddesschess Fighting Chess Awards, also started off with a bang with a win against one of the most experienced players in the Championship, Camille Baginskaite, who has been on many U.S. Women's Chess Olympiad Teams and has an unsurpassed depth of playing experience.

I'm no expert (that's for sure) but it seemes to me just eyeballing it that the other players eventually agreed to strategic draws, waiting to see what tomorrow brings.  Don't wait too long ladies to make your moves - thanks to this new playing format, you no longer have nine plus games to battle it out.

How did the young'uns do in the Main Event?  In Group A, not a win in sight. Robson and Naroditsky drew their games, I have to give them credit, against higher rated and mucho-more experienced players.  In Group B, Shankland and Hess, the other two young guns, drew against each other.  GM Yasser Seirawan, a sentimental favorite of mine, defeated GM Alexander Shabalov.  Well well, seems the men's Mini-Event I may be more entertaining than I thought.

Oh yeah, I almost forgot.  While everyone knows that the Scholastic Center and Chess Club of St. Louis is the primary sponsor (backed by Mr. and Mrs. Sinquefield, with other local power brokers), there are other sponsors for the U.S. Chess Championships.  It seems we all have been relegated to a "fantasy chess" page this year, where it doesn't appear a whole lot is going on - not even logos for the "other" sponsors.

Here's a contest for you - can you find a link tonight on either uschesschamps website or the website for the St. Louis Chess Club to this fantasy chess site?  I couldn't - but then I'm just an old going blind broad, who needs to wear her glasses to pluck her eyebrows.  First one to email me (use the contact information, darlings) by midnight my time (sorry, I'm no help there, it's daylight savings time in Milwaukee, Wisconsin, where I'm located so I can't tell you what it is standard time), will win a Goddesschess tee shirt!
Posted by Jan at 9:56 PM