I found this article  very disturbing.  First, it doesn't say how these tombs were discovered.  From the photograph, it looks like the tomb or tombs are built out of timbers forming mausoleums that were above ground - not underneath it!  Second, what is the old man doing STANDING INSIDE THE TOMB?  I mean - this cannot be a professional archaeological dig because no archaeologist would EVER do that (except, maybe, Zahi Hawass) when it's clear as glass that there are still artifacts inside the tomb!  There are methods for working an excavation and this sure doesn't look like any method at all to me!  This looks to me like tomb robbery, not tomb excavation - and one of the thieves has got his picture in the local newspaper.  Geez!

﻿﻿The grave goods are impressive - that "armor" -- stitched together panels of leather - absolutely breathtaking and the large brass bowl the old man in the photograph is stealing would be worth a fortune on the antiquities market - and it looks to be in perfect condition.

I wish I could see the bronze mirror.  I would like to know what other inscriptions or drawings were on its "back."  But only the intriguing clue "mountain" -- could this possibly be a reference to the great sacred mountain where resides the Mother Goddess Xi Wangmu (who in her archaic form was part woman, part tiger)?

Precious Relics Found in Ancient Tombs
Pub Date: 11-04-14 16:45 Source: www.cnanhui.org
More treasures were found in two ancient tombs dated back to China's Warring States (475-221BC) in Lu'an, Anhui Province, as a well-preserved sword with exquisite workmanship, and a complete suit of leather-made armour were unearthed in the southern tomb, which suggest that the tomb master was probably a military officer with prominent status then.

If other clues, such as seal or epigraph are excavated in the tomb, combing with history records that are able to prove the master's identity can be found, the discovery of this ancient tomb is expected to be listed into national annual archaeological finds. 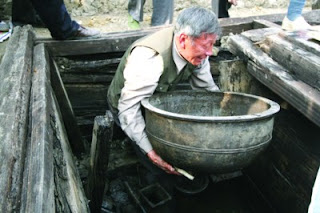 In the meantime, clearing work in the other tomb, a smaller one, which was believed to belong to the tomb master's wife, was done, with 120 articles of relics, including copper wares, painting wares and pottery wares.

Among which, a bronze mirror , decorated with designs similar to the Chinese character of "ɽ"(mountain) on the back, was deemed as a much-treasured relic.

Total 54 articles of relics were unearthed in the southern tomb yesterday.