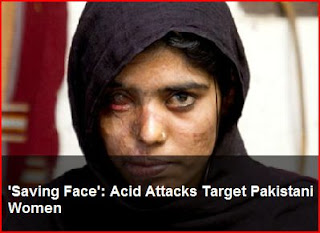 Survivors of acid attacks whose plight became the focus of an Oscar-winning documentary now fear ostracism and reprisals if the film is broadcast in Pakistan.

Sharmeen Obaid-Chinoy made history earlier this year when she won Pakistan's first Oscar, feted across the country for exposing the horrors endured by women whose faces are obliterated in devastating acid attacks.

Her 40-minute film focuses on Zakia and Rukhsana as they fight to rebuild their lives after being attacked by their husbands, and British Pakistani plastic surgeon Mohammad Jawad who tries to help repair their shattered looks.

When "Saving Face" scooped a coveted gold statuette in the documentary category in Hollywood in February, campaigners were initially jubilant.

The Acid Survivors Foundation Pakistan (ASF) had cooperated on the film but some survivors now fear a backlash in a deeply conservative society -- and are taking legal action against the producers.

"We had no idea it would be a hit and win an Oscar. It's completely wrong. We never allowed them to show this film in Pakistan," said Naila Farhat, 22, who features fleetingly in the documentary.

She was 13 when the man she refused to marry threw acid in her face as she walked home from Independence Day celebrations. She lost an eye and her attacker was jailed for 12 years.  After a long, painful recovery, she is training as a nurse.

"This is disrespect to my family, to my relatives and they'll make an issue of it. You know what it's like in Pakistan. They gossip all the time if they see a woman in a film," said Farhat, taut skin where her left eye dissolved.

"We may be in more danger and we're scared that, God forbid, we could face the same type of incident again. We do not want to show our faces to the world."

Lawyer Naveed Muzaffar Khan, whom ASF hired to represent the victims, said legal notices were sent to Obaid-Chinoy and fellow producer Daniel Junge on Friday. The survivors, he said, "have not consented for it to be publicly released in Pakistan", adding that such agreement was required for all the women who featured in the film, no matter how fleetingly. Khan said the producers had seven days to agree not to release the film publicly in the country, or he would go to court to seek a formal injunction.


"They (survivors) were absolutely clear in their mind in not allowing any public screening as that would jeopardise their life in Pakistan and make it difficult for them to continue to live in their villages," he told AFP.

But Obaid-Chinoy insisted the women signed legal documents allowing the film to be shown anywhere in the world, including Pakistan. She told AFP that Rukhsana had been edited out of the version to be shown in the country out of respect for her concerns, adding she was "unclear about the allegations" and would respond to the legal complaints "when a court orders us".

Many of the women are routinely threatened by their husbands or relatives and it is a television broadcast that they particularly fear.

"The accessibility is so wide scale, the chances are their lives are going to be threatened," said the lawyer, Khan.

The producers promised that profits from screenings in Pakistan would go to Zakia and Rukhsana, but the row also hints at deeper differences between film-makers trying to tell a story and charity workers on the ground. Some medical personnel, for example, believe it was wrong to focus on an expatriate doctor at the expense of countless local surgeons who have treated dozens of victims. Others believe the film was too sensational and question whether it really will make a difference to the survivors struggling to live in Pakistan, where there are scores of such attacks each year.
Posted by Jan at 8:50 PM