From Art Daily
(within the past 24 hours)

Excerpted:
NEW YORK, NY.- Christie's Important 20th Century Decorative Art & Design sale on June 14 in New York will be highlighted by the most important work to appear at auction by Isamu Noguchi: a unique marble table commission made for Mr. & Mrs. Dretzin (estimate: $800,000-1,200,000). The auction will feature an encyclopedic array of the most renowned designers of the 20th Century, with the best examples in each category, including works by Isamu Noguchi, George Nakashima, Armand Albert Rateau, Charles & Ray Eames, Charlotte Perriand, Frank Gehry, Ron Arad, Claude and Francois-Xavier Lalanne, among others. With more than 130 lots expected to realize in excess of $4 million, the sale will immediately follow A San Francisco Iconoclast: Henry Africa's Magnificent Tiffany Collection, comprising seven beautifully crafted leaded glass lamps valued at $2 million. 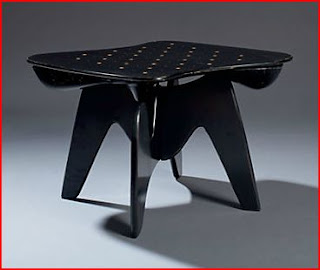 Other works by Isamu Noguchi in the sale include a rare chess table, designed for the 1944 exhibition, "The Imagery of Chess" (estimate: $60,000-80,000) ... .  A legendary event in its day, "The Imagery of Chess" exhibition was conceived by the New York dealer Julien Levy and artists Max Ernst and Marcel Duchamp. Lauded by many, Newsweek declared that with his chess table Noguchi had "created the most beautiful piece in the show."

What follows is a cut and paste job from the Christie's online catalog describing the Noguci chess table pictured above - chopped up but it's all here: