Memorial Day is this coming Monday.  I have a 3-day weekend and I should be hard at work stripping wallpaper in the family room on that never-ending going-nowhere "re-do" - OHMYGODDESS, why oh why oh why did you ever allow me to start it????  I'm stalled and have no desire whatsoever to pull out the new wallpaper scorer and scraper I bought a few weeks ago (in a fit of madness).

The house is still a mess from last week's whole-house carpet and furniture cleaning.  Then I got sick and next to nothing has been done all week, although I am feeling much better now. 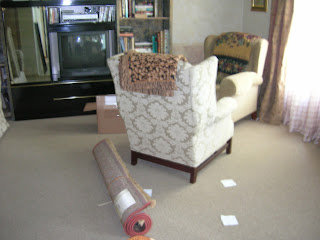 Jan knows how to bring rain. All I have to do is haul out two heavy hoses, connect them together, drag one end to the spigot out back (because the spigot out front has a thingy on it that sprays the water anywhere except into the hose where it is supposed to go, so I can't use it and no, darlings, I have not been able to get the damn thingy OFF, and neither has brother-in-law Fred, brother-in-law Jerry, or honorary brother-in-law Otto (one of Fred's younger brothers), and they are all strong men with TOOLS.  So, the hose gets connected to the back spigot and I get a lot of exercise tugging 100 feet of hose this way and that, and then running from front to back and back to front, etc. etc., and sometimes even through the house because that's the shortest way from the back to the front, to size up how the water is "sprinkling" out of the sprinkler thingy. 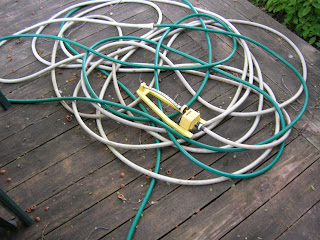 Anyway, I put the broken sprinkler thingy on the hose (how it got broken is a whole 'nother story that is best not gone into) and watered the south part of the front lawn Thursday morning (early, after taking 30 minutes to get the hose hauled out, hooked up, etc., before I ever turned on the water -- all of this in my pajamas, pink slippers and robe, LOL!) and again last evening when I got home from the office -- before the storms finally came.

This was the yard one Sunday evening a few weeks ago.  It's a little hard to see through the downpour but my usual spring-time swimming pool appeared below the retaining wall near the far fence line -- you can sort of see it to the right of what looks like an "island" of flowers. 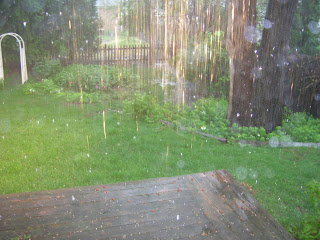 But now, the grass was DRY!  Turning brown.  If it's one thing I cannot stand, it's a damn brown lawn.  Of course, that could be those blasted sod web worms too.  So tonight after I cut out front, even though I was fearful tired and sweaty and just wanted to drink another gallon of cheap pink wine with my feet up on the back deck, I pulled out the wheely thingy that the weed and feed and bug killer gets dumped into and I laid down a ton of it over the front lawn.  Back and forth, back and forth and poof, all the granules are gone just like that!  Maybe I had the holes on the bottom open too wide?  Whatever... 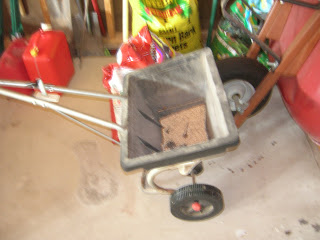 If those sod web worms are eating my lawn, I swear to Goddess if it is the last thing I do, I WILL prevail over them, even if it takes me all frigging summer and a thousand dollars worth of bug killer to get rid of them!  So, I'll probably have a horrific nightmare about a giant sod web worm coming after me from underneath my bed...

The rains came last night, as I said.  And again, and again, in rolling waves throughout Friday night.  No severe weather was threatened but it sure got noisy out there.  Especially with my bedroom windows open.  The winds kept switching up as this front battled that front for supremacy over southeastern Wisconsin, but for the most part it wasn't fiercely windy so I was able to keep my south-facing window open a few inches, which isn't protected by much of an overhang like the west window, and it was fine.  Hardly any rain came in.   Fell asleep to the sound of rain on the roof.  About 4:30 Saturday morning a loud storm came rolling in from the west, just as the birds outside were going into full song.  There is nothing quite like slowly awakening to bird song on a cool morning, snuggled under the sheet and comforter, the windows open, the air fresh, light not even yet shimmering in the east but you know it's coming because the birds are singing.  Ahhhhh, sheer Heaven! Listened to the patter of the rain on the roof, lots of lightning flashes and booms of thunder.  The bed even rattled a couple of times, it was that loud and that close as it passed overhead toward the southeast.  I fell back asleep...

It continued to rain until about 10 a.m. Saturday morning, and everyone's grass is already looking much much happier!  The last of the clouds soon wafted off to the southeast and by 11 a.m. when Ann arrived for our Memorial Day trek to the bank (I empty out my year's worth of coins collected in a glass wine carafe - they wouldn't be my coins if they weren't held in a wine carafe, darlings), a chat with the old soldier who sells Memorial Day poppies inside the bank lobby.  He had pictures from when he served in the Korean War.  I thought of Dad, and how so not fair it was for him to pass when he was only 80.  But I know he was tired, and he was sick, and he was tired of being sick, and it was just his time.  Still, not fair.  We none of us ever got to really say goodbye, because he was unconscious when he was taken to the hopsital that final time, and he never regained consciousness.  It's important to be able to say goodbye.


And then off to lunch at Olive Garden.  Home by 2 p.m. and plenty of time to get some work done.

NOT.  Well, I did hang two pictures above my desk in the living room, and fussed over a deskscape for hours.  Still not happy with it but it is looking like my desk again, with messy piles of research here and there and things I can look at that make me smile.  Who will care for them once I'm gone, all these things I love so much, that have so much meaning for me, and for no one else?

It was cool last night; so cool outside, in fact, that I had the windows only half open and slept under the comforter!  It's hard to believe that today and Monday are forecast as hot and steamy, and into the rest of next week as well.  Damn!  High of 93 F today and perhaps severe storms tomorrow.  Which means I'll have to cut the grass out back while looking like Bogey pulling the boat in "The African Queen".  Geez Louise!

Today dawned cloudy, overcast, cool.  The house is nice and cool, and that's good, because by 8:30 the clouds had blown away and the sun is now out full force.  My crazy neighbor to the northwest already was out cutting his grass, but he had the right idea - got it done early (he fired up the lawn mower before 8:30 on a SUNDAY, GEEZ!) before the heat and humidity comes.  As soon as I finish this, I'll switch out loads of laundry and then get out back and get that grass cut.

Here are some photos of my blowsy peonies: 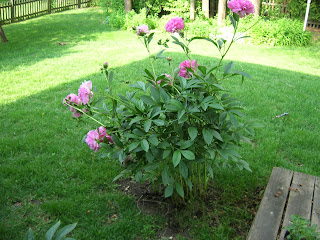 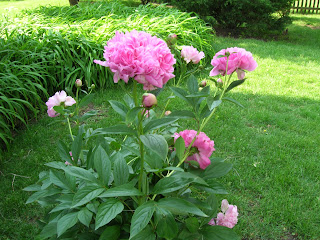 Okay, that grass aint gonna cut itself, got to get my rear in gear.  Maybe I'll have a hot ham sandwich first...
Posted by Jan at 10:09 AM