In November we have Veterans' Day. In May we have Memorial Day.

Memorial Day has a very interesting history.  I always thought it originated as a memorial to honor soldiers killed during World War I (probably because of the tear-inspiring poem "In Flanders Fields") -- but not so.  Some of its traditions actually date back to before the end of the Civil War.  See History of Memorial Day for more information.

The tradition of the red poppy is also fascinating (quoted from History of Memorial Day):

In 1915, inspired by the poem "In Flanders Fields," Moina Michael replied with her own poem:


She then conceived of an idea to wear red poppies on Memorial day in honor of those who died serving the nation during war. She was the first to wear one, and sold poppies to her friends and co-workers with the money going to benefit servicemen in need. Later a Madam Guerin from France was visiting the United States and learned of this new custom started by Ms.Michael and when she returned to France, made artificial red poppies to raise money for war orphaned children and widowed women. This tradition spread to other countries. In 1921, the Franco-American Children's League sold poppies nationally to benefit war orphans of France and Belgium. The League disbanded a year later and Madam Guerin approached the VFW for help. Shortly before Memorial Day in 1922 the VFW became the first veterans' organization to nationally sell poppies. Two years later their "Buddy" Poppy program was selling artificial poppies made by disabled veterans. In 1948 the US Post Office honored Ms Michael for her role in founding the National Poppy movement by issuing a red 3 cent postage stamp with her likeness on it.

It seems to me that our country is more divided now than ever before since her start as a nation, more divided even than during the Civil War and its aftermath.  People are HATING each other, really gut-wrenching HATING each other - wanting to kill each other and sometimes doing just that, just because of skin color, religion, politics.  Why?  Ask yourself - why is this happening?

Now, after a dozen years at war, we have veterans coming home to -  a fricking mess of a country.  No jobs.  Little help from overwhelmed Veterans' Centers.  Scant sympathy from politicians who don't want to spend money on the very soldiers they so easily committed to fight wars on foreign soil.  Soldiers in record numbers are applying for disability benefits because of horrible conditions they now suffer from, some physical, some emotional and mental, conditions that have been inflicted upon them during our years at war.

Just one of dozens of similar stories from around the nation, this one from The Boston Globe:

What will our government's response be?  Will certain politicians refuse to raise taxes in order to pay for the necessary care and services our veterans need and deserve for sacrificing so much in the service of their country?  Will certain politicians cut their plush salaries and benefits, and cut their staffing in half, and close their fancy offices, in order to voluntarily provide more funding to the Veterans Administration?  Will certain politicians insist that the SNAP program be cut even more -- the very program that provides food to millions of veterans' wives and children -- in order to pay for the medical care those same veterans now need?  How many new veterans' medical centers could be constructed if the Bush era tax cuts to the top 1% in this country were eliminated?  Do the math, figure it out.

If you are not outraged by what is going on in this country right now at this moment, why aren't you?

Here's Dad, who served in WWII and was awarded a purple heart for wounds suffered during his service.  He, like millions of other WWII and Korean War vets, didn't apply for the benefits to which they were entitled under the law!  If they had, what politicians would have dared tell them NO, WE CAN'T AFFORD TO GIVE YOU WHAT WE PROMISED? 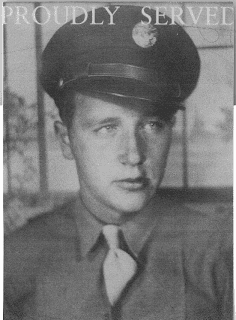 Dad died close to Veterans' Day, on November 3, 2002, and was one of several veterans featured in an article in The Milwaukee Journal Sentinel about that generation of soldiers now fast disappearing.  They are dying, one by one, thousands every month.  Soon, there will be none of them left.


I'm pretty sure what Dad would say about all this if he were still here.  It has nothing to do with politics, whether you're "left" or "right," "red" or "blue."  It has everything to do with keeping the promises we, as a nation, made to those whom we sent off to fight for us.  If we cannot keep our promises to those brave men and women, what the hell good are we as a people, as a nation?