This discovery has gotten lots of press coverage.  But really, women in many parts of the world have probably been wearing something similar since they started making clothes!


A revolutionary discovery is rewriting the history of underwear: Some 600 years ago, women wore bras. 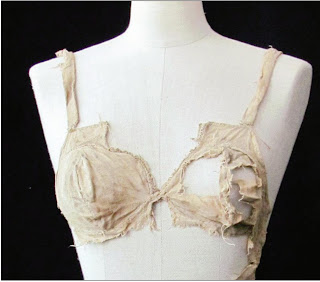 The University of Innsbruck said that archeologists found four linen bras dating from the Middle Ages in an Austrian castle. Fashion experts describe the find as surprising because the bra had commonly been thought to be only little more than 100 years old as women abandoned the tight corset.

One specimen in particular "looks exactly like a [modern] brassiere," said Hilary Davidson, fashion curator for the London Museum. "These are amazing finds."

Although the linen garments were unearthed in 2008, they did not make news until now said Beatrix Nutz, the archeologist responsible for the discovery.  Researching the items and carbon-dating them to make sure they were genuine took some time. She delivered a lecture on them last year, but the information stayed within academic circles until a recent article in the BBC History Magazine.

"We didn't believe it ourselves," she said in a telephone call from Innsbruck. "From what we knew, there was no such thing as bra-like garments in the 15th century."

The university said the four bras were among more than 2,700 textile fragments - some linen, others linen combined with cotton - that were found inter-mixed with dirt, wood, straw and pieces of leather.

"Four linen textiles resemble modern-time bras" with distinct cups, and one in particular looks like today's version, it said, with "two broad shoulder straps and a possible back strap, not preserved but indicated by partially torn edges of the cups onto which it was attached."

And the lingerie was not only functional. The bras were intricately decorated with lace and other ornamentation, the statement said, suggesting they were also meant to please a suitor. [Oh for pete sakes!  What about a woman just pleasing herself by wearing something pretty!]

While paintings of the era show outerwear, they do not reveal what women wore beneath. Davidson, the fashion curator, described the finds as "kind of a missing link" in the history of women's underwear.

Women started experimenting with bra-like garments in the late 1800s, and the first modern brassiere was patented in the early 20th century. It is thought to have been invented by New York socialite Mary Phelps Jacob, who was unhappy with the look of her gown over a stiff corset.

Also found at Lemberg Castle in Tyrol was a linen undergarment that looks very much like a pair of panties. But Nutz said it is men's underwear - women did not wear anything under their flowing skirts back then. [So you say.  You also said bras weren't invented until the 19th century.]

"Underpants were considered a symbol of male dominance and power," she said.

Medieval drawings often show a man and a woman fighting for a pair of underpants in a symbolic battle to see who "wears the trousers" in the family.