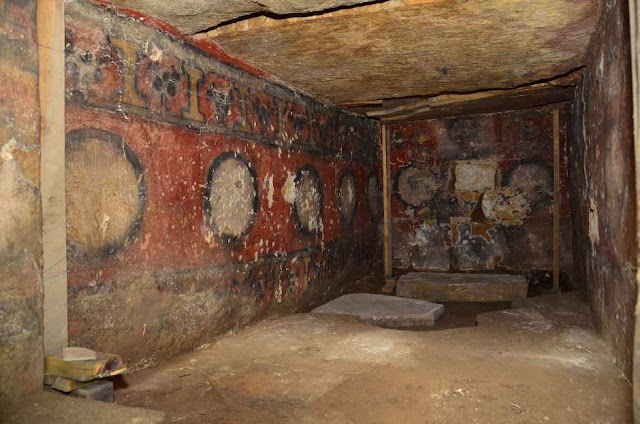 Archaeologists have discovered an ancient 1,100-year-old burial chamber at the archeological site of Atzompa, in the Mexican state of Oaxaca.

The funerary complex, consisting of three burial chambers, is different from the previously discovered finds in the region.

It was located inside a building designed exclusively to house a series of tombs placed vertically, one above another, and unlike the ones found so far, they are not underground, according to the National Institute of Anthropology and History.

That's it for the text.  There are several photographs.

And, from The National Geographic:

Archaeological "gold mine" illuminates connection between king and sun god.

Some 1,600 years ago, the Temple of the Night Sun was a blood-red beacon visible for miles and adorned with giant masks of the Maya sun god as a shark, blood drinker, and jaguar.
Long since lost to the Guatemalan jungle, the temple is finally showing its faces to archaeologists, and revealing new clues about the rivalrous kingdoms of the Maya.


Unlike the relatively centralized Aztec and Inca empires, the Maya civilization—which spanned much of what are now Guatemala, Belize, and Mexico's Yucatán region (Maya map)—was a loose aggregation of city-states.

"This has been a growing awareness to us since the 1990s, when it became clear that a few kingdoms were more important than others," said Brown University archaeologist Stephen Houston, who announced the discovery of the new temple Thursday.

El Zotz, in what's now Guatemala, was one of the smaller kingdoms, but one apparently bent on making an big impression.

By 2010 archaeologists working on a hilltop near the ancient city center had discovered 45-foot-tall (13-meter-tall) Diablo Pyramid, Atop it they found a royal palace and a tomb, believed to hold the city's first ruler, who lived around A.D. 350 to 400.

Around the same time, Houston and a colleague spotted the first hints of the Temple of the Night Sun, behind the royal tomb on Diablo Pyramid. Only recently, though, have excavations uncovered the unprecedented artworks under centuries of overgrowth.