Police in northern Spain have recovered one of the country's great cultural treasures - a 12th-Century religious manuscript stolen a year ago. 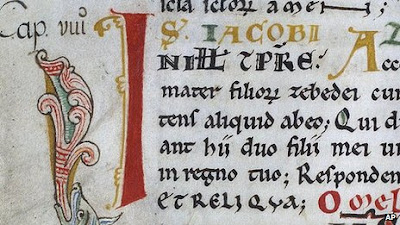 The Codex Calixtinus was found in a garage near Santiago de Compostela and four people were arrested over the theft from the city's cathedral.

The richly decorated book is considered the first guide for those following the ancient pilgrimage route to Santiago.

Police arrested a technician who worked at the cathedral and three relatives.

Christians believe the Santiago de Compostela cathedral to be the burial place of St James the Greater, one of Jesus's apostles.

The manuscript was found after the technician and three members of his family were arrested on Wednesday.

Besides the Codex, police also found other valuable old books stolen from the cathedral and at least 1.2m euros (£963,000) in cash.

A replica of the Codex is on display in a glass case at the cathedral.

Only a handful of people had access to the room in which the original was kept. It is thought to date from around 1150.


A hugely valuable illuminated manuscript has disappeared from the cathedral of Santiago de Compostela in northern Spain, say police.

The Codex Calixtinus dates from the 12th Century and was compiled as a guidebook for medieval pilgrims following the Way of Saint James.

This is the oldest copy of the manuscript and is unsaleable on the open market.

Only a handful of people had access to the room in which it was kept.

This edition of the Codex Calixtinus is thought to date from around 1150.

Its purpose was largely practical - to collect advice of use to pilgrims heading to the shrine there. It also included sermons and homilies to St James.

On Wednesday afternoon, the book was reported missing from the room where it is kept.

"We are investigating its disappearance," a police spokeswoman said, according to AFP news agency.

"It is usually kept in a room to which only half a dozen people have access," she said.

The Codex is only brought out on special occasions, such as last year's visit of Pope Benedict, when it is closely guarded.

If the work has been stolen, it will be impossible to sell it on the open market, says the BBC's arts reporter Vincent Dowd.

From The Star Online

MADRID: A medieval text stolen from the Santiago de Compostela Cathedral in northwest Spain last year was found in a nearby garage on Wednesday, after police arrested a handyman - fired after 25 years at the cathedral - and three members of his family.

The Codex Calixtinus, a 12th century collection of sermons and liturgical passages, vanished last July from a safe deposit box in the cathedral, the end of the ancient pilgrimage route the Camino de Santiago.

Police said they had found the elaborately illustrated manuscript, a treasured part of Spain's cultural and religious heritage, in a garage near the Galician town.

The cathedral is the reputed burial place of Saint James the Greater, one of Jesus's twelve apostles who, according to tradition, went to Spain to preach Christianity.

The Codex tells the story of how the apostle's remains were transferred to Santiago de Compostela and details the various routes to the town - effectively a guide for early pilgrims.

Earlier dawn raids on properties connected to the detained former church handyman, his wife, son and another woman had led police to the discovery of at least 1.2 million euros, eight copies of the Codex and other ancient books that had also been stolen from the cathedral.

Officers also found documents and correspondence related to senior church figures and keys to various outbuildings. The cathedral's book of hours, a popular type of devotional book in the Middle Ages, was also recovered.

The main suspect, whom police have not named, is a man who was sacked after working for the cathedral as a freelance handyman and electrician for more than 25 years, police said in a statement.
He was made redundant after faking a work contract to make it look like he had permanent job, and claimed he was owed 40,000 euros for unfair dismissal, the police said. - Reuters
Posted by Jan at 7:31 PM