To quote Mr. Spock: Fascinating.  Now, I'm not sure exactly what this may mean; it could be evidence of ancient trade, but it doesn't necessarily mean that Admiral Zheng He or any of his vast armada actually landed on and/or traded with the natives of Manda when he was on his journey in the 1400s that eventually led to his circumnavigating the world  (well before any European did it); it could mean that someone with a penchant for old coins visited Manda at some time a hundred or more years after Zheng He came and went, and that someone might not necessarily have been Chinese.  Or perhaps the coin was a family piece, handed down on a sea-faring family from generation to generation, and some WWI or post-WWII visitor lost it (quel horreur!)  But when viewed as a whole along with other evidence of trade and contact between Africa and China, the discovery of this 600-some year old coin sure is interesting.

A joint expedition of scientists led by Chapurukha M. Kusimba of The Field Museum and Sloan R. Williams of the University of Illinois at Chicago has unearthed a 600-year-old Chinese coin on the Kenyan island of Manda that shows trade existed between China and east Africa decades before European explorers set sail and changed the map of the world.

The coin, a small disk of copper and silver with a square hole in the center so it could be worn on a belt, is called "Yongle Tongbao" and was issued by Emperor Yongle who reigned from 1403-1425AD during the Ming Dynasty. The emperor's name is written on the coin, making it easy to date. Emperor Yongle, who started construction of China's Forbidden City, was interested in political and trade missions to the lands that ring the Indian Ocean and sent Admiral Zheng He, also known as Cheng Ho, to explore those shores.

"Zheng He was, in many ways, the Christopher Columbus of China," said Dr. Kusimba, curator of African Anthropology at The Field Museum. "It's wonderful to have a coin that may ultimately prove he came to Kenya," he added.

Dr. Kusimba continued, "This finding is significant. We know Africa has always been connected to the rest of the world, but this coin opens a discussion about the relationship between China and Indian Ocean nations."

The island of Manda, off the northern coast of Kenya, was home to an advanced civilization from about 200AD to 1430AD, when it was abandoned and never inhabited again. Trade played an important role in the development of Manda, and this coin may show trade's importance on the island dating back to much earlier than previously thought.

"We hope this and future expeditions to Manda will play a crucial role in showing how market-based exchange and urban-centered political economies arise and how they can be studied through biological, linguistic, and historical methodologies," Dr. Kusimba said.


###
Other researchers who participated in the expedition to Manda include Dr. Janet Monge from the University of Pennsylvania, Mohammed Mchulla, staff scientist at Fort Jesus National Museums of Kenya and Dr. Amelia Hubbard from Wright State University. Also involved was Professor Tiequan Zhu of Sun Yat-Sen University, who identified the coin. The researchers also found human remains and other artifacts that predate the coin. 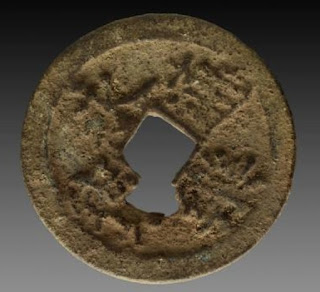 I noted the description of the coin (photo from article at smithsonian.com) -- it had the square opening in the center, which I believe in ancient Chinese iconography represented the four "corners" of the square plane of the earth in its earliest representations, and also the four directions and the four winds, all contained within the circle of the coin, which represented the great expanse of the heavens encircling the Earth (whether the Earth was perceived as a flat plane or a sphere, or something in-between).

So, did Zheng He imagine that he was traveling in a large circle around the outer-most edges of the plane of the Earth when he embarked on his travels, and if he veered too far off course his ship and those of his fleet would fall off the Earth?  That seems to fly in the face of China's very early discovery of the properties of magnetism and its early use by their navigators to point ships in a certain direction.  Indeed, herstory shows us that the Chinese, like the ancient Egyptians (pre-Muslim invasion), were not ones to throw out old knowledge and "dictum" when new knowledge and "dictum" came along.  They just kept using the same symbols and incorporated the old into new concepts with a gloss of new intepretation, blending all that came before and all that was known now into a (more or less) harmonious whole.  These were people who did not suffer from cognitive dissonance :)

Some more coverage (lots of repeat articles out there!) on the discovery of this coin:

Way to go, Gavin Menzies :)  It's only a matter of time, methinks, before his theory is accepted seriously by a majority of historians and archaeologists.
Posted by Jan at 4:40 PM