From Monty Python and the Holy Grail, King Arthur's battle against the Black Knight, courtesy of video at You Tube:

I am not comparing my opponent in R3 of the Hales Corners Chess Challenge this past Saturday to the Black Knight, but that game (and in the skittles room afterward) did have it's Monty Pythonesque moments.  Here it is, in all of its not-so-raging glory: 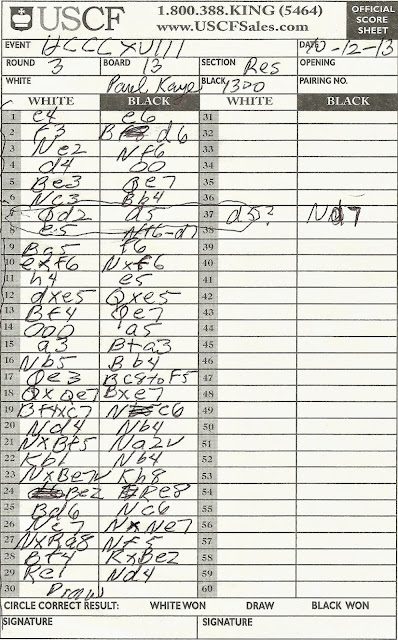 Notice moves 7 and 8 -- those are where I recorded phantom moves on my part!  As best a very patient Paul Kaye (after the game) and I could figure out, the move Qd2 did not happen.  Mr. Kaye said to me, nobody would move the Q out that early.  I said, well, I would.  Ha, take that, Mr. Black Knight!   But --

We agreed on all the rest of the moves.  I offered a draw on move 30 and he accepted.  Who knows, I may have given up a mate in 1 and not even realized it, har!

For a truly Monty Pythonesque sequence of events, I direct your kind attention to move 24.  See my crossed out move - d6?  Mind you, I had the white pieces in this game, but what I did was move a black pawn on d6 BACKWARD FROM ITS POSITION TO d5.  It was actually quite a brilliant move, because it forked two pieces and I believe I had some attacking pieces lurking in the wings, just waiting.  The only thing is, IT WAS NOT MY PIECE TO MOVE.

I suppose we should have called for a TD at that point when I'd realized what I had done.  I didn't even think of that, actually.  I'm so used to playing chess in a casual setting, mostly with Mr. Don when he was alive and we often did that sort of crazy thing in the heat of our games when we were trying to beat each other's brains out on the chessboard (sometimes I think he did it deliberately just to provoke me, but I sure didn't do it to provoke Mr. Kaye!)  I looked up at Mr. Kaye and whispered something like, oh no, I moved your piece by mistake!  So sorry, and I motioned with my finger what I had just done.  Mea culpa.

He just looked relieved (I can't blame him) -- was he looking in absolute horror at the board at that point?  Maybe.  OH MY!  I felt terrible!  Did he realize that I'd done a totally illegal move?  Maybe not, because he didn't stop the clock.  Or maybe he was in shock.  Or maybe he was being a gentleman.  Or maybe he was terrified I was going to pull a big knife out of my purse if he'd said anything.  By the way, ladies, did you all notice how nice looking he is?  Oooh la la.  If I were 40 35 30 years younger, I'd have -- well, never mind.  He probably has a wife and 5 kids at home.

I motioned for him to hit his clock to stop his time running, and he did.  It was only a few seconds, but still.  I felt horrible!  I looked over the board, this time trying to make sure I was focusing on the CORRECT COLOR PIECES and made a move (Be2).  I hit my clock (again), and the game resumed.

The rest, as they say, is HERstory.

Now, darlings, I'm wondering if it would have made any difference in the game if the moves that I wrote down had actually happened?  What if Mr. Kaye missed those moves because he was in catatonic shock or something?  Or, what if  neither of us had noticed that I had actually moved one of Mr. Kaye's pieces?  Would I have continued playing with the black pieces, totally obliterating my own (white) pieces at that point? What if at some point a few moves later Mr. Kaye realized that somehow I had managed to turn the tables on him by assuming play with his (black) pieces -- what would he have done?  Pulled out a big knife on me???

Um, wait a minute -- would I have actually checkmated the black king with black pieces???

Does this kind of thing happen to anyone else???
Posted by Jan at 8:20 PM