Challenge XVIII had 66 players, of which 12 were chess femmes (myself included).  That comes out to about an 18% ratio of female participation.  Excellent!  More than double the world average of female to male players.

Goddesschess made a record pay-out for prizes this Challenge!  Here are the prize-winners:

Here's a photo of Ellen Wanek and I in the lobby of the hotel that hosted our playing venue after she presented me with a gift tote bag that says "The Dance of the Goddesses."  Every chessplayer knows that at the best, most transcendental moments of one's game, the pieces become ibau (ancient Egyptian for "dancers," also a pun on their word for ivory, ebou, from which their earliest boardgame pieces were carved), dancing across the board!  I was so touched by her thoughtful choice, and surprised by the gift!  Those Halloween decorations are so cute. 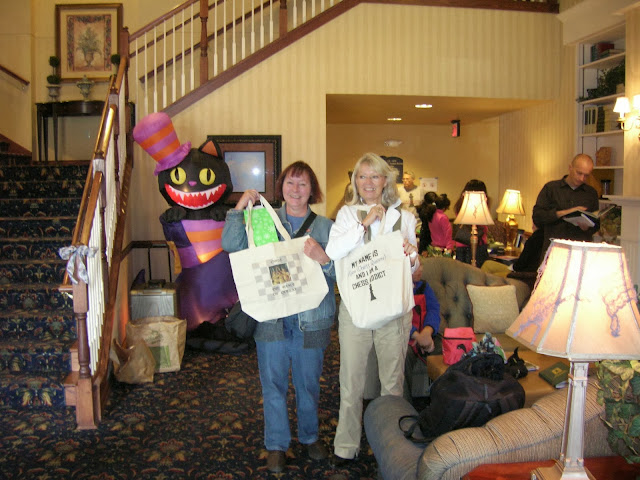 Hmmm, I think I need to get new smaller jeans and a smaller jacket (one size down, I think), YAYYYY!

I have no idea what happened to the pics that were taken of Ellen, Janet Ulrich and me -- they weren't on my camera.  There were at least two photos taken because the first one may not have worked.  I thought they'd been taken with my camera, but nope, guess not.  Or else the camera was not operating properly at the time.  It's an "antique" - a 5.1 megapiel Coolpic 5600 purchased in - 2005?  Geez Louise!  I heard a commercial on t.v. earlier this evening that was touting a camera with 41 megapixels - how quickly what is top of the line technology a few years ago is outmoded!

Hales Corners Chess Club posted several photos of the action at Challenge XVIII.  Here is one from R2, showing me in my match with Devish Anand: 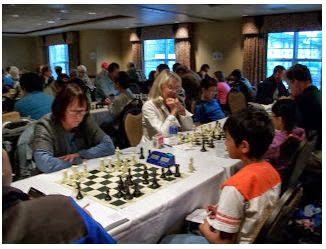 My chess buddy, Ellen Wanek, who teaches chess in schools to children in Sheboygan and also established Chess in the Park in Sheboygan, is next to me on the right.

This is one of the games I'm rather proud of, even though I resigned in the end.  It was my longest game (went 33 full moves) and afterward in the skittles room Devish told me that I had missed a mate in two.  SAY WHAT? Well, obviously I didn't see it, wasn't even aware of it, and he followed up almost immediately by saying "but I blocked it."  LOL!  If anyone reads this and hopefully I've got my notation correct, did I have a mate in 2?  First chance I'll have to pull out a board and play through this game is Thursday night. 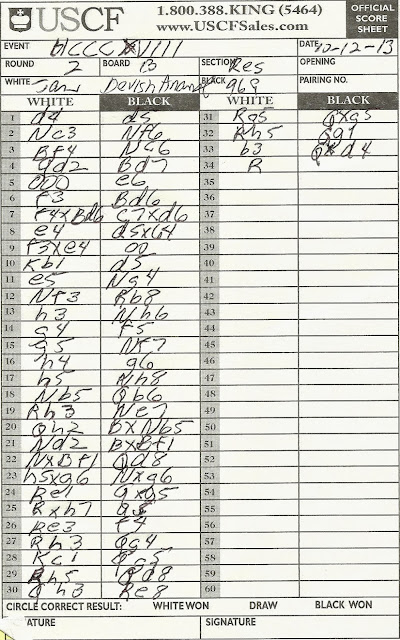