An interesting find, and the experts are quite excited about it because of the exquisite detailing of the costume dressing the figurine.  Is it Freya?  To keep this in perspective, 4.6 cm (the size of the figurine) is 1.81102362 inches!  She is very tiny, not even two inches long -- and so finely wrought and detailed.

A newly discovered female figurine amulet from Revninge in the east of Denmark represents a very interesting find due to her remarkably detailed Viking Age dress.

On April 22, 2014, Paul Uniacke had started to explore a field near Revninge with his metal detector – several items had already been recovered when to his astonishment a small fine figurine appeared. He instantly recognised it as Viking Age and immediately contacted Østfyns Museums, who confirmed his thoughts and started the process of conservation.

It is not always easy to imagine how people of the Viking age really looked. However, the discovery of this small gilt silver figurine contains a wealth of detail giving new knowledge about costume and jewellery of the period.

Archaeologist Claus Feveile, Department of Landscape & Archaeology at Østfyns Museums, explained, “Small characters from the Viking period are extremely rare and Revninge-woman’s dress is incredibly detailed which will contribute to the discussion on the appearance of clothes and how they might have been worn.”

There is no doubt that the 4.6 cm high figure with her hair tightly drawn back into a bun is from the Viking Age, but the detail is providing some surprises. 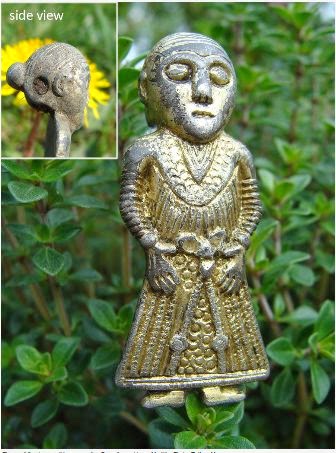 The body of the figurine is two-dimensional which is often the case, however the head is unusual as it is three-dimensional. Through the back of the head there is a small hole, which shows that the figure has been worn as a hanging decorative amulet. Her arms are placed down her sides with her hands on either side of her abdomen. The dress has long sleeves and is ankle length. Each section of the costume is picked out with different decoration, representing various textile and dress making techniques. It is possible she is wearing a pearl necklace which is picked out on the figure with stamped circles.

It is the three-lobed item of jewellery that sits between her hands that is causing the greatest excitement. Archaeologists had never seen where it was really meant to be located during the life, as when found in graves it is usually placed on the chest area.
The figurine has been dated to 800 AD and can be understood in a variety of ways. They can represent goddesses like Valkyries or Norns but here it is tempting to link Revninge Woman to the fertility goddess Freya.
In 2013 at Hårby a Valkyrie figure with a face that looks like Revninge-woman was found, however unlike the Hårby Valkyrie the Revninge Woman carries no weapons, and the position of the hands and the lobed jewellery over the stomach may refer to fertility, making it more likely she represents the goddess of fertility.
Source: Vikingemuseet Ladby
Posted by Jan at 12:07 PM