Update on Findings: The Red Lady of El Miron (Spain)

I am sad to report that I have not seen my little injured squirrel since March 17th.  I had named him Intrepid, Treppy for short.  I fear Treppy may have succumbed to his injuries (infection), got run over by a car or fell prey to a predator.  However, I have a squirrel who started visiting at the same time as Treppy who is blind in one eye (cataract). I've named him Blinky because when he is not on the alert his eyelid droops over the blind eye and it looks like he is blinking or even winking.  Here is a photo of him I took on Monday during a brief snowfall -- yes, it is still snowing in Milwaukee (damn!) 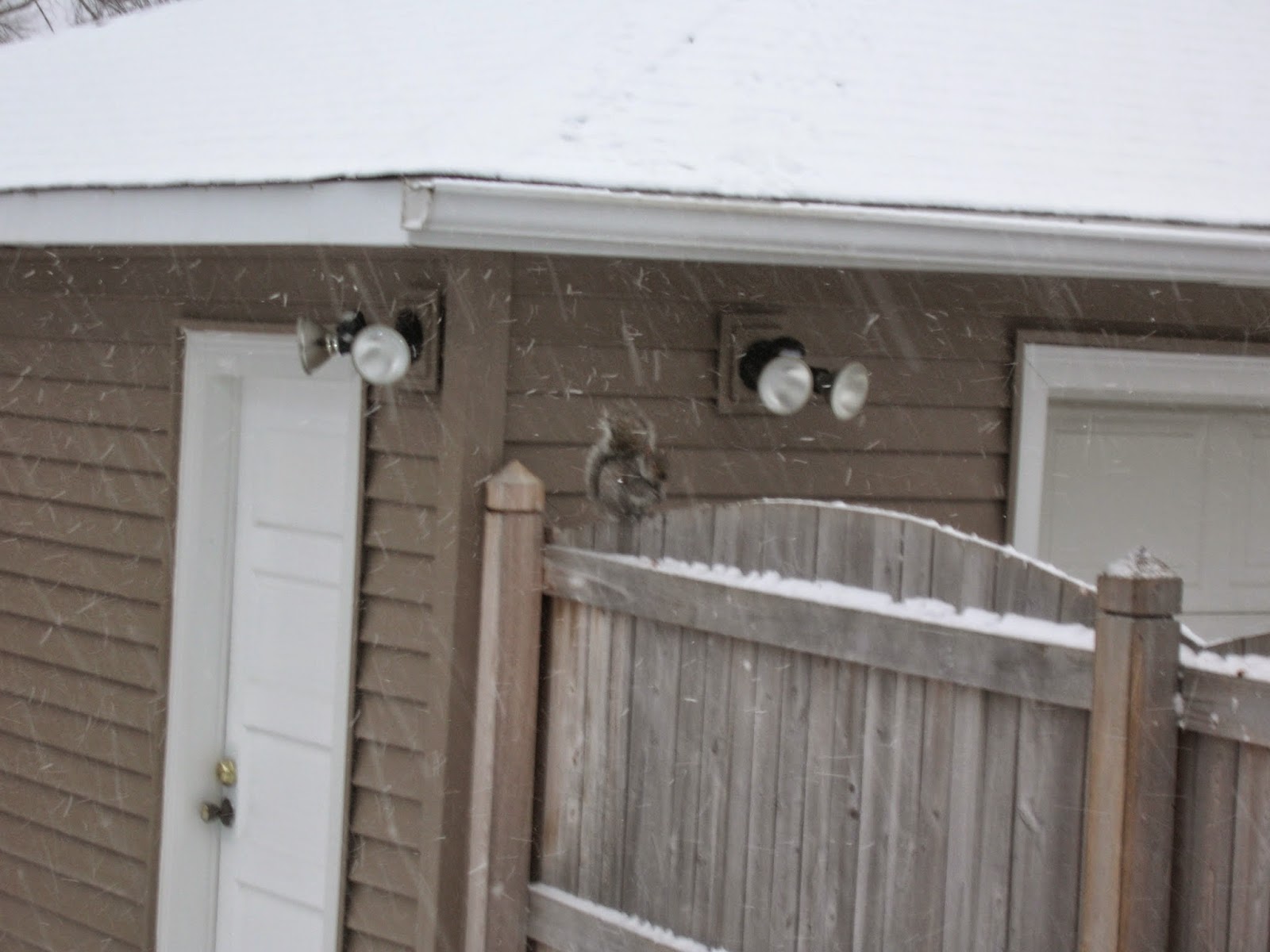 Sorry, it is not the best photo, I had the lens on the longest close-up I could get but the camera is 10 years old - an antique by today's standards!  He is very chubby now since he found my yard and a steady food source of peanuts, hazelnuts and sunflower seeds.  When he hears me whistle he comes running and turns his good eye toward me so he can see where I am tossing the food for him -- very clever!  You really cannot see it in this photo although because I know it is there, I imagine I do -- his right eye is totally opaque with a cataract.

Okay, enough about my wild "pets."  I came across this article last night at Ancient Origins:

Archaeologists unravel secrets of 18,700-year-old burial of the Red Lady of el Miron

The woman whose remains were tinted with red ochre and buried with flowers about 18,700 years ago in a cave in northern Spain may have had what modern people would consider a hard life. But on the other hand, she must have been considered special because no burial so elaborate has been found from this period in Europe.
Researchers excavating the cave where she was buried call her the Red Lady of el Miròn. They announced this month that they found a triangular engraving on a large limestone block possibly placed to mark the grave. They interpret the engraving as representing the female pubis.
New Scientist magazine says this is the first Magdalenian culture burial site found on the Iberian Peninsula after a 150-year search. The Magdalenian Age in Europe lasted from about 19,000 to 11,000 years before the present. The woman lived during the Ice Age.
The researchers wrote an article for the Journal of Archaeological Science about the Red Lady’s burial for the March 2015 issue. An abstract of this article at ResearchGate says:

Her burial may have been marked by rock engravings suggestive of a female personage, by red ochre staining of a large block adjacent to her skeleton, and by engravings on the adjacent cave wall, and the burial layer itself was intensely stained with red ochre rich in specular hematite specially obtained from an apparently non-local source. The ochre may constitute the only demonstrable ‘grave offering.’ The grave was partially disturbed by a carnivore of wolf size after the corpse had decomposed. Then, it is hypothesized that the skeleton was covered over again and (re-) stained by humans after they (or the carnivore) had removed the cranium and most of the large long bones.

A photo of the woman’s jawbone here shows she had most of her teeth.
The lead researcher, Lawrence Straus of the University of New Mexico in the United States, has been taking students on Stone Age digs around Europe for 38 years. The co-director of the project is Manuel González Morales of the Prehistoric Research Institute of Cantabria.
“Since 1996, he has been digging El Mirón Cave in Cantabria, Spain, with levels that range in age from the Mousterian (41,000 years ago—the time of the last Neanderthals) to the Bronze Age (3500 years ago),” says a 2013 press release from UNM.
In addition to the woman’s body, found in the 2010-2011 dig, archaeologists excavating the cave have found the milk tooth of a child, thousands of stone artifacts and bones of ibex, red deer and fish. They’ve also found several antler points, bone needles and beads made of animal teeth and perforated marine shells.
Encyclopedia Britannica says people of the Magdalenian culture lived at the same time as large herds of bison, reindeer, and wild horses. They appear to have had a semi-settled life and abundant food. Their housing included rock shelters, caves and substantial dwellings in winter and tents in summer. They hunted animals with traps, snares and spears. “The great increase in art and decorative forms indicates the Magdalenians had leisure time. They also experienced a population explosion, living in riverside villages of 400 to 600 persons; it has been estimated that the population of France increased from about 15,000 persons in Solutrean times to over 50,000 in Magdalenian times,” the encyclopedia says.


Of the Lady in Red, who died between age 35 and 40, Straus and his colleagues wrote:

She had lived in the cold, open environment of Oldest Dryas, with a subsistence based on hunting mainly ibex and red deer, fishing salmon and some gathering of plants, including some starchy seeds and mushrooms. The technology of her group included the manufacture and use of stone tools and weapon elements made on both excellent quality non-local flint and local non-flints, as well as antler projectile tips and bone needles. Her burial may have been marked by rock engravings suggestive of a female personage.

While huge advances in knowledge have been made, there is still much research to be done to fully understand the lives and death rites of Paleolithic humans.
Posted by Jan at 11:33 AM