At The Colchester Archaeologist

a remarkable small find from Brightlingsea

On Wednesday (1st April), the Trust completed our archaeological excavation at Moverons Quarry in Brightlingsea. This has been a long-running project, and it produced a great deal of very interesting evidence. In September 2014, we also made a remarkable find on the site. Now that we have finished our fieldwork there, we would like to share the find with you. It is a bronze Roman figurine, about four inches high, of an upright bird with a human head. Trust archaeologist Ben Holloway made the discovery, in the top part of the fill of a field-boundary ditch. We excavated fragments of Roman pottery and imbrex(roof-tile) from the same context. The figurine is at a secure location but has not yet been sent away for conservation or to be studied by a specialist, so our preliminary comments here are purely speculative!
Trust senior archaeologist Howard Brooks thinks that it is an intriguing find: we don’t know if it was lost, displaced, discarded, or deposited as a votive in a burial or at a shrine. We think that the figurine represents a harpy. It is quite finely detailed, and is in the form of an upright bird with a woman’s head and with small wings which are fully open. The figure has feathers and talons, and braided hair; however, it seems to have a serpent’s tail which functions as a support. It is standing on a damaged base and also seems to have been attached at the top of the support. A harpy was a figure in Greek and Roman mythology and harpies are often represented in ancient art and literature. There were three harpies: they were the daughters of Thaumas (son of the sea) and Electra (daughter of Oceanus) in Greek mythology. Their names were Aello, Ocypete and Celaeno. The harpies originated as beautiful winged women, goddesses, but over time they developed into monsters. They were spirits of the wind or storm winds. They were employed by the gods to punish or carry wrong-doers to the Underworld, or as messengers from the Underworld. Trust archaeologist Emma Holloway thinks that the figurine is similar to two figures which decorate the two front corners of a small, portable, domestic Roman brazier or grate for indoor use, at Pompeii.
We have discovered other complete Roman figurines of mythological figures at Colchester, over the years: the Minerva from the St Mary’s hospital site; a bronze Venus; a copper-alloy Abundantia or Fortuna from the Cups Hotel site; and a copper-alloy Mercury from the Balkerne Lane site. A bronze figurine of Jupiter, king of the Roman gods, was found at St Mary’s Lodge in 1844 and, in 1945, Mr Albert Beales ploughed up a Roman bronze statuette of Mercury at Gosbecks (now on display in Colchester Castle Museum). The figurine of a harpy has also been found at York. Interestingly, we discovered the figurine at Brightlingsea only weeks after we discovered the hoard of Roman treasure at the Williams & Griffin store in the High Street at Colchester!
We will publish a specialist’s report on the figurine in our final report on the site at Brightlingsea.
The image shows the figurine, before cleaning and conservation (from the front and in profile). 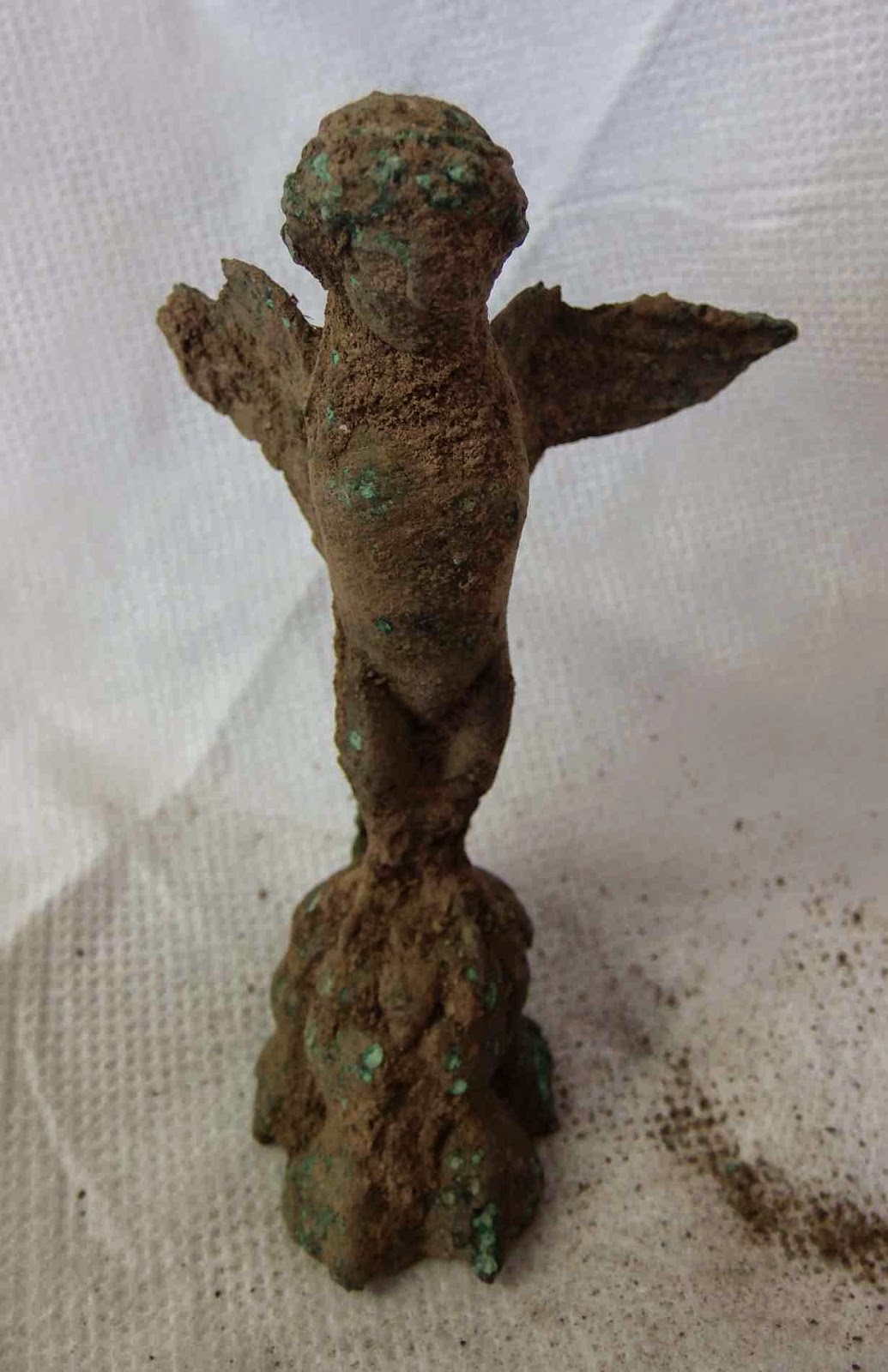 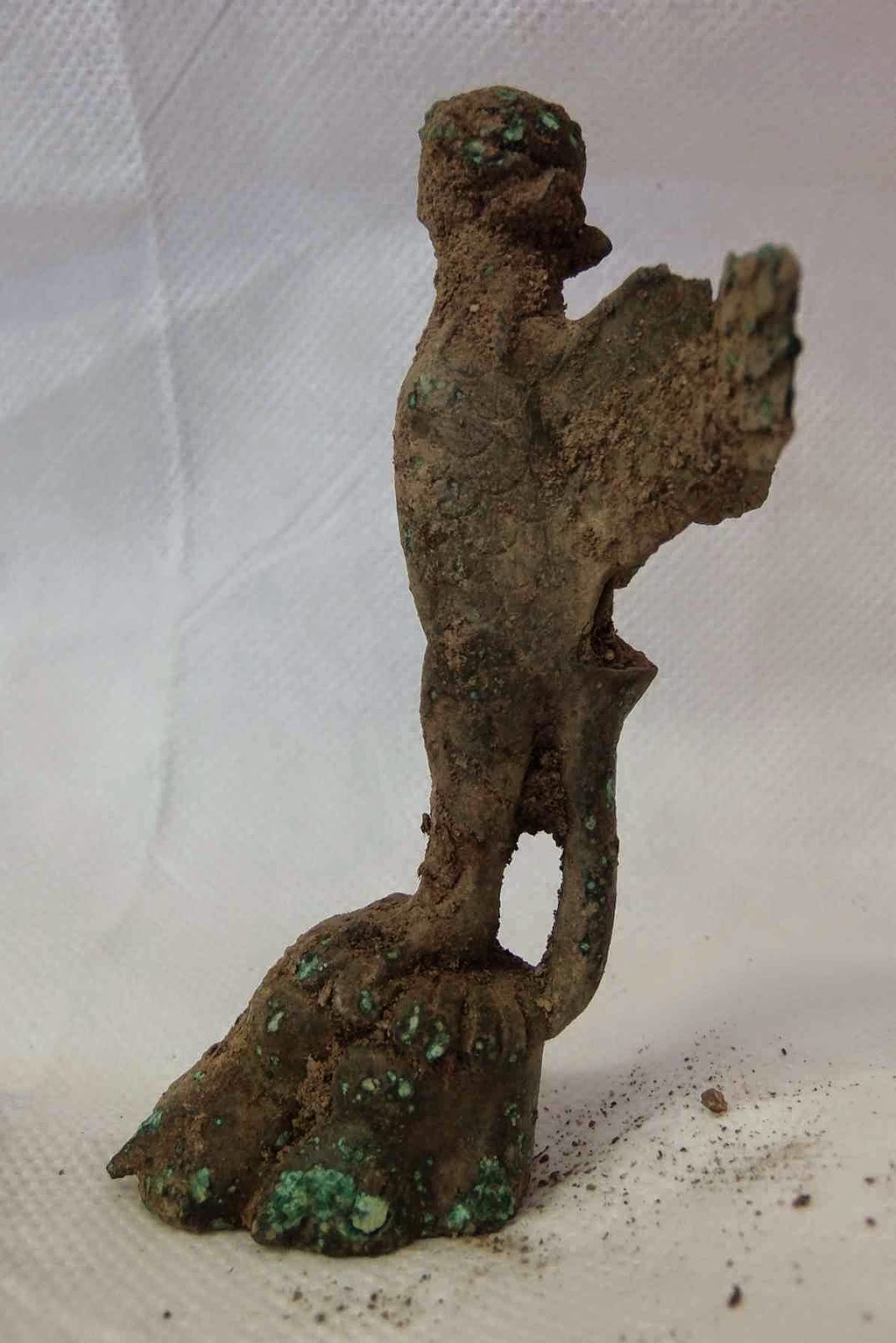