Catching Up: Ancient Site in Texas Adds to Debate About When Humans First Arrived Here

Who Were the First Americans?  Ancient Tools Dug Up in Texas Add to the Debate 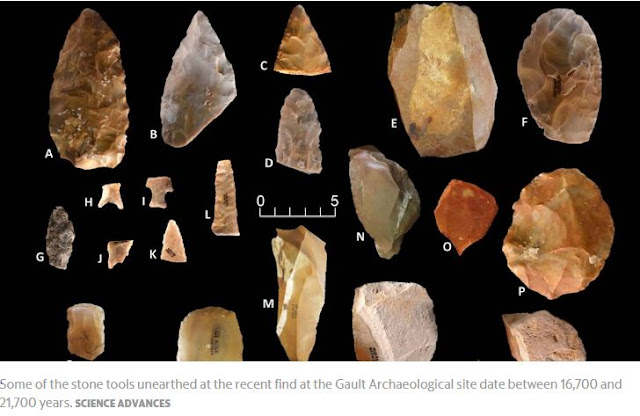 A new archaeological find suggests that humans inhabited America, specifically parts of what is known today as Texas, as far back as 21,700 years ago.

A group of scientists led by Thomas Williams of Texas State University recently unearthed more than 150,000 human-modified stones at the Gault Archaeological Site in Central Texas, about 40 miles north of Austin.

The group doesn’t claim to have nailed the answer to the question, “Who were the first Americans?” but they might have discovered another runner in that race. The find illustrates “the presence of a previously unknown projectile point technology in North America from before [16,000 years ago],” say their findings, published in the July 11 edition of the journal “Science Advances."

Williams' team of archaeologists excavated the Texas bedrock and uncovered ancient rocks shaped into bifaces — used as hand axes — blades, projectile points, engraving tools and scrapers dating to between 16,700 and 21,700 years. They refer to the tools as the Gault Assemblage.

Not much about the physical traits of those who used tools can be inferred from the material in the find, but its significance lies in how old the items are. The team used optically stimulated luminescence to age the materials, which means they were able to find how long it had been since the sediment the items were found in had been exposed to sunlight, according to Science News.

After a haul of flint spearheads near Clovis, New Mexico, was uncovered in the 1930s, popular scientific belief held that the first occupants of the Americas — referred to as the Clovis culture— arrived about 13,000 years ago, according to National Geographic. But the Gault find is one of several more recent — and deeper — digs that are putting that theory to bed.

Material attributed to the Clovis people was previously unearthed at the Gault site — finds dating to the Clovis period have also been found in Colorado and Utah, according to PBS. But what Thomas and his crew found is older, and was found — perhaps predictably — deeper in the ground.

If these Americans indeed occupied parts of Texas in the time range identified by the Gault Assemblage, they probably arrived in the Americas during the peak of the last Ice Age, about 20,000 years ago, according to the BBC. At that time, North America would have been covered with permafrost and dotted with tall glaciers, which would have made for suboptimal travel conditions during their journey across the land bridge from Asia known as Beringia.