Are Recurring Cycles of Violence Something We in the U.S. Have to Live With?

Hola!  Spring has sprung here and when weather has permitted I've been working hours outside daily doing the massive spring yard and garden clean-up.  I swear there is more to clean up every year - or else I'm just getting older and slower.  When I haven't been working outdoors I've been working on the house - there is always new decor to bring in and changes to make with the change of the seasons, along with thorough indoors cleaning from attic to basement.  Whew!

Today I'm posting several items I've piled up over the past week or two or three.  Enjoy!  First up:

Have any of you heard of Dr. Peter Turchin?  I can't recall ever hearing or reading about him until just this past week, and the article that I read made the hairs on the back of my neck tickle and stand up, wowsers!  Like Dr. Allan Lichtman, co-creator with Dr. Vladimir Keilis-Borok of the incredibly predictive "Thirteen Keys to the White House" in 1981, Dr. Turchin's predictive model of recurring cycles of violence in the United States approximately every 50 years (other than in 1820) has thus far proven remarkably accurate.

Check out this article from Live Science and note the date:  IT WAS WRITTEN ON AUGUST 12, 2012.

Will the US Really Experience a Violent Upheaval in 2020?
By Natalie Wolchover, August 3,  2012 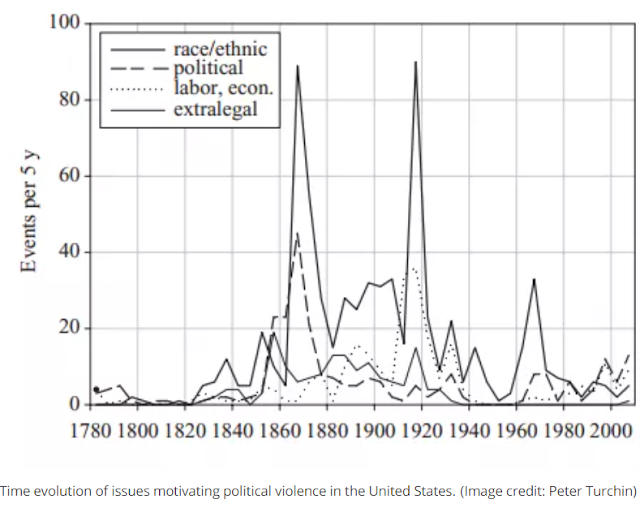 Circa 1870, the North fought the South in the Civil War. Half a century later, around 1920, worker unrest, racial tensions and anti-Communist sentiment caused another nationwide upsurge of violence. Then, 50 years later, the Vietnam War and Civil Rights Movement triggered a third peak in violent political, social and racial conflict. Fifty years after that will be 2020. If history continues to repeat itself, we can expect a violent upheaval in the United States in a few years.

It sounds like pseudoscience, but it's a published theory. "My model suggests that the next [peak in violence] will be worse than the one in 1970 because demographic variables such as wages, standards of living and a number of measures of intra-elite confrontation are all much worse this time," said Peter Turchin, an ecologist, evolutionary biologist and mathematician at the University of Connecticut.