I have a bone to pick when it comes to classifying this item of art - or any art - as "ritual" unless there is substantial evidence to back up such a conclusion.  How do we know when something as old as the Shigor Idol is "ritual art" or not?  Just because it's old?  Just because it was evidently "portable" - at least, it could be taken down and moved if the assumptions archaeologists and anthropologists, etc. have made over the years about "hunter-gatherer societies" are all true.  Was the Venus of Willendorf "ritual art?"  It was carved of stone, small, and could be moved easily from place to place. What about the cave paintings at Lascaux?  Ritual?

The truth is - WE DON'T KNOW. In the articles I read, I did not see any convincing evidence discussed to suggest that the Shigor sculpture was intended to be ritual in nature.  If you spent tons of hours carving a nine foot tall totem pole on a piece of wood, wouldn't you move it with you when you moved your camp too? We should hesitate before applying 20th century assumptions to ancient items.  We often have zero clues (or are just outright wrong - but people usually don't talk about that when that happens - oops).  Just admire it for what it is - a thing of interest (not what I'd call a thing of beauty) and extreme rarity, having survived thousands of years.  End of rant.

How the World’s Oldest Wooden Sculpture Is Reshaping Prehistory 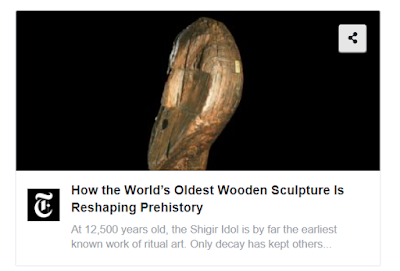 Additional articles on the Shigir Idol for your reading pleasure (if you want to learn more):
From The Smithsonian Magazine (online):
This Wooden Sculpture is Twice as Old as Stonehenge and the Pyramids
By Nora McGreevy
March 24, 2021
From Science Magazine (online):
This 11,000 year-old Statute Unearthed in Siberia May Reveal Ancient Views of Taboos and Demons
By Andrew Curry
April 25, 2018
(Sounds like somebody may have read "Angels and Demons" by Dan Brown, written in 2000)
From Archaeology (Magazine, online):
Scientists Reevaluate Date of Russia's Shigor Idol
By - not credited
April 5, 2021
Posted by Jan at 11:13 AM