Blast from the Past - Ash Rai, Chess and Six Degrees of Separation 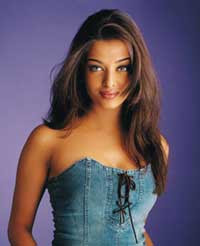 This was a little piece I did in January at Isis' request, we had some fun with it. I was reminded of it today when I read a post done under my "white horse" entry a few weekends ago :)
Aishwarya Rai and Chess - Six Degrees of Separation
Please contribute to your favorite charity through Kevin Bacon's Sixdegrees.org

What's that adage about coincidence - "there is no such thing"... A few weeks ago my Goddesschess cohort and fellow goddess, Isis and I were email-chatting about movies and I recommended "Bride and Prejudice" to her as an hilarious romp with great dance scenes and music, a fun, feel-good interpretation of the Jane Austen classic "Pride and Prejudice." (It sure made me get out of my chair and shake my booty).

Some days later Georgia rented the video and she and Michelle (daughter goddess) loved the movie. Georgia decided to buy it for me as a gift (thank you, Isis). The beautiful Indian actress (1994 Miss World), Aishwarya Rai, starred in the film as Lalita Bakshi, Elizabeth Bennet's alter-ego. (Photo of Rai from BizHat.com)

Rai, a superstar in her native India, has appeared in over 40 films since her debut in a 1997 Bollywood film "Iruvar." She is perhaps best known to western audiences for her role in "Bride and Prejudice," which was her first English-language film. Release of the film in the United States led to immense publicity for Rai, including appearances on popular programs such as "60 Minutes", "David Letterman" and "Oprah Winfrey" and presented her to a whole new segment of audience - the English-only speaking world.

Rai has many critics - they criticize her acting skills; they criticize her film choices; they criticize her personal life. But now that Rai has broken the east/west barrier, she has no intention of quitting. Rai has signed on to star with Colin Firth (who portrayed Mr. Darcy, Elizabeth Benet's protagonist and love interest in A&E's 1995 production of "Pride and Prejudice," the best Darcy ever and arguably the best production ever of "Pride and Prejudice") and Ben Kingsley in 2007's historical epic "The Last Legion," as well as French director Coline Serreau's remake of her 2001 film " Chaos," which will cast Rai alongside Meryl Streep. Rai has not abandoned the cinema of her heritage, however, and has signed on for 2007 Bollywood movies including the "The Heart of India" and the historical romance "Jodha-Akbar" -- in which she will play the title role of Mughal king Emperor Akbar's Hindu wife and queen.

Read the rest of the article here.
Posted by Jan at 8:43 PM