Lotus, Symbol of the Goddess 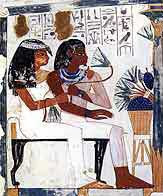 From Barbara Walker's "A Woman's Encyclopedia of Myths and Secrets." (Image: not from Walker - Nakht and wife holding water lily, a large water lily also to the right of the couple, resting on the offering table, another water lily wrapped around Nakht's wife's right wrist, also notice the lotus intertwined with the pilar to the far right - that is classic. Nakht's tomb, ancient Egypt - the symbolism will become apparent when you read the entry below!)

The central phrase of Tantrism, Om mani padme hum, meant the Jewel (male) in the Lotus (female), with interlocking connotations, the penis in the vagina, the fetus in the womb, the corpse in the earth, the God in the Goddess representing all of these.(1)

The father-god Brahma claimed to be a universal creator, nevertheless, he was styled "Lotus-born," for he arose from the primal Goddess's yoni. Egypt's father-god Ra also claimed to be a creator but owed his existence to the Goddess called "great world lotus flower, out of which rose the sun for the first time at the creation."(2)

Virtually all Egyptian Goddess-forms were symbolized by the lotus.(3) Pharaohs were sexually united with the World Lotus to achieve rebirth after death. The funeral hymn of Unas declared that he "had union with the goddess Mut, Unas hath drawn unto himself the flame of Isis, Unas hath united himself to the lotus."(4)

Most Oriental mystics held that spiritual knowledge began with carnal knowledge. The lotus was the Goddess's gate, and sex was the Way through the gate to her inner mysteries. With proper sexual exercises, a true sage might achieve the final flowering of revelation described as the thousand-petaled lotus of invisible light emanting from the top of the head after ascending the spinal chakras from the pelvis.

Worshippers of Vishnu sometimes painted their god as the source of the World Lotus, which grew on a long stem from his navel. But since "the primary reference of the lotus in India has always been the goddess Padma, 'Lotus,' whose body itself is the universe, the long stem from navel to lotus should properly connote an umbilical cord through which the flow of energy would be running from the goddess to the god, mother to child, not the other way."(8) Some Hindu cosmogonies saw the whole world as the lotus flower, with seven petals representing the seven divisions of the heavens where the cities and palaces of the god were located.(9)

In the Middle East, the lotus was lilu, or lily.(10) It was the flower of Lilith, the Sumero-Babylonian earth mother claimed by the Jews as Adam's first wife. The three-lobed lily or fleu-de-lis, like the shamrock, one stood for the Triple Goddess's three yonis, which is why the lily was sacred to the trune Queen of Heaven. The Blessed Virgin Juno conceived her savior-son Mars by the lily, and the same flower was adopted as a conception-charm of the Blessed Virgin Mary.(11) When Isis was assimilated to the burgeoning legends of the Virgin, her Egyptian images held the phallic cross in one hand, the female lotus seed-vessel in the other, like the Goddess shown on the Isiac Table.(12)

What was the Isiac Table?

According to the Theosophical Society (yes, they still exist):
Isiac table: Spiritual Theosophical Dictionary on Isiac table
Isiac table. A true monument of Egyptian art. It represents the goddess Isis under many of her aspects. The Jesuit Kircher describes it as a table of copper overlaid with black enamel and silver incrustations. It was in the possession of Cardinal Bembo, and therefore called "Tabula Bembina sive Mensa Isiaca ". Under this title it is described by W. Wynn Westcott, M.B., who gives its "History and Occult Significance" in an extremely interesting and learned volume (with photographs and illustrations). The tablet was believed to have been a votive offering to Isis in one of her numerous temples. At the sack of Rome in 1525, it came into the possession of a soldier who sold it to Cardinal Bembo. Then it passed to the Duke of Mantua in 1630, when it was lost.

But, according to information at Sacred Texts (under entry "The Bembine Table of Isis"), the Table (tablet) was NOT lost/destroyed! There is also a enlargeable line drawing of the Table which would take days to try and decipher - I see so many interesting things in it! Wow. Who knew? I sure didn't and I've been studying this stuff since 1999!

Added 4/5/08 - from Isis:
I read the article about the Lotus, and I thought you might like to know that the famous blue lotus of Egypt, now exstinct, had aphrodesiac properties...Pharmacologists test dryed lotus from tombs and discovered that the lotus was a form of natural Viagra. The Egyptians would soak the lotus in wine to extract the lotus viagra. I wrote about this in our Showgirls article, Aphrodesiac Cooking.
Posted by Jan at 7:20 PM