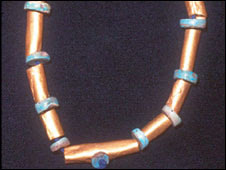 A necklace found near Lake Titicaca in southern Peru is the oldest known gold object made in the Americas, archaeologists say.

Radiocarbon dating puts its origin at about 4,000 years ago, when hunter-gatherers occupied the area.

The researchers say it appears to have been fashioned from gold nuggets.

The discovery suggests that the use of gold jewellery to signify status began before the appearance of more complex societies in the Andes, they report.

Writing in the journal Proceedings of the National Academy of Science (PNAS), they say the artefact is the earliest worked gold found not only in the Andes, but the Americas as well.

Study leader Dr Mark Aldenderfer of the department of anthropology at the University of Arizona, Tucson, said it demonstrated an emerging social role for gold beyond simple decoration.

He told BBC News: "The gold reflects a universal tendency for human beings to strive for prestige and status.

"The gold reflects that process in people living in a simple society which is in the process of becoming more complex."

Status symbol
The necklace was found alongside the jawbone of an adult skull in a burial pit next to primitive pithouses at Jiskairumoko, a hamlet that was settled from 3,300 to 1,500 BC.

The researchers believe it had been worn by an adult, probably an elderly woman.

Marks on the necklace suggest that gold nuggets had been flattened with a stone hammer and then carefully bent or hammered around a hard cylindrical object to create a tubular shape.

The gold would have signalled the prestige of its wearer, "not at all different to today," said Dr Aldenderfer.

"This reflects a lot more than just a lovely object," he added. "This is a major piece of how people lived their lives and how they competed for status in the past."

Archaeologists believe a nine-bead necklace recently found near Lake Titicaca in Peru is the oldest-known gold artefact in the Americas.

The necklace was found by the jawbone of an adult skull in a burial pit next to a primitive dwelling at Jiskairumoko.

Scientists believe this small hamlet was settled from 3300 to 1500BC

Writing in the journal Proceedings of the National Academy of Sciences (PNAS), the US researchers say radiocarbon dating of nearby material places the necklace's origin at about 2100 BC.

The necklace's gold beads are thick and cylindrical in shape with different lengths.

One of the beads had been perforated and a small greenstone bead was found in the soil.

Archaeologists are unsure how the necklace was made as no obvious tools to create the beads were found at the site. [Why would they even assume it had been made at the site??? It could have been - and probably was - made elsewhere and traded for, or gotten as booty during a war - or came to the person as part of a marital settlement. There are lots of different possibilities about how the necklace could have got where it ended up.]

But they say as each of the beads has distinctive hammer marks it is likely the raw native gold was hammered first and then bent and/or hammered around a hard cylindrical object to create the tubular shape.

The necklace's discovery at a settlement of seasonal hunter-gatherers shows that the use of gold jewellery to distinguish wealthy and important people began before the appearance of more complex societies in the Andes, the researchers argue.

"This discovery lends support to the hypothesis that the earliest metalworking in the Andes was experimentation with native gold," they conclude.

"The presence of gold in a society of low-level food producers undergoing social and economic transformations coincident with the onset of sedentary life is an indicator of possible early social inequality and aggrandising behaviour.

There is also nothing to support the purported age of the artifact. Just because the necklace was found in a layer dating to 4000 years ago doesn't mean the artifact is that age; it could be older, for one thing. It might have been made hundreds of years before, or even thousands of years before the layer where it was buried. But can that ever be determined? It is also possible that the layers might have been disturbed where the necklace and burial were found and the necklace could be much younger than where it ended up being buried. The restored artifact is beautiful, though!
Posted by Jan at 9:11 PM