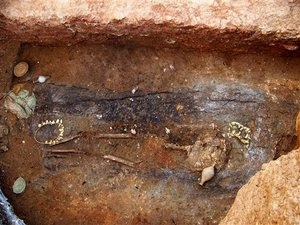 This is a very interesting burial, dating to about 300 BCE. This woman must have been of very high status - buried with four golden wreaths (!!!!) plus dog-head, gem-encrusted earrings!!!! (Unfortunately, no photos of the earrings, I would love to see what they look like). The dog-head earrings provide a possible clue; maybe she was a priestess of the Great Goddess in her aspect of Hecate, whose totemic companions were dogs (guardians of the gates to the after-world and, in some religions, accompanied the souls of the deceased into the after-world). 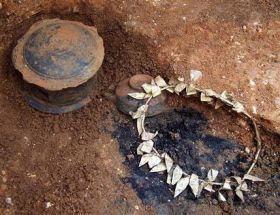 Story from PhysOrg.com Published: 11:25 EST, June 07, 2008 Ancient Greek grave found during subway work Photos: In this undated handout photo provided by the Greek Culture Ministry on Friday, June 6, 2008, a 2,300-year-old gold wreath is seen beside two ancient clay pots in a newly-discovered grave in Thessaloniki, northern Greece. The grave, found during work for a new subway, contained four gold wreaths, earrings, as well as clay and copper vases. (AP Photo/Greek Culture Ministry) The 2,300-year old grave contained a female skeleton, accompanied by four gold wreaths and gold earrings in the shape of dogs' heads set with semiprecious stones. A Culture Ministry statement said Friday that the grave goods included a bronze mirror, a bronze vase and six clay pots. The woman had been buried in a wooden coffin, traces of which survived. The ministry said part of the grave had been destroyed by a modern sewage pipe. The Thessaloniki subway is scheduled for completion in 2012. ©2008 The Associated Press. All rights reserved. This material may not be published, broadcast, rewritten or redistributed.
Posted by Jan at 9:28 PM