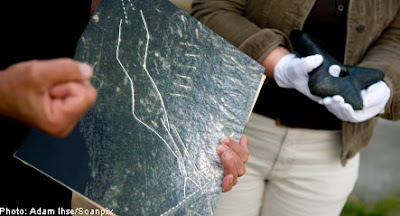 This is a great story! From The Local (Sweden), in English:

An artifact from the Stone Age has been hiding in the plain sight of museum visitors and researches in western Sweden.

But no one noticed until archaeologist Bengt Nordqvist suddenly discovered the form of a human body on a stone axe.

“The axe has been in the museum’s collection for more than 100 years. Anyone could have found the image,” said Nordqvist, who had a hard time containing his excitement.

The stone axe was found in connection with the building of a road near Stala in the municipality of Orsut in Bohuslän region of western Sweden in 1875.

The ancient tool is a prized archaeological in and of itself, and has been seen by a considerable of visitors to the Gothenburg City Museum and the Stone Age Museum in Orust.

The axe is about 9,000 years old and in the shape of a cross.But it is the inscribed image of a headless human figure which has turned the axe into a sensation.

“It is seldom we come so close to figurative shapes of Stone Age people. OF we have a single national treasure in the country from this period, it is this object,” said Nordqvist, who is an expert on the Stone Age from the Swedish National Heritage Board.

The figure’s missing head could be explained by wear, but the image could also be a symbolic picture of a shaman or medicine man in a trance during which his mind in another place, according to Nordqvist.

The axe and other artifacts are included in an exhibit “Orust’s hidden treasures (Orust glömda skatter) which opens at the Stone Age Museum in Orust next week.
Posted by Jan at 7:40 PM