The Lake That Disappeared! 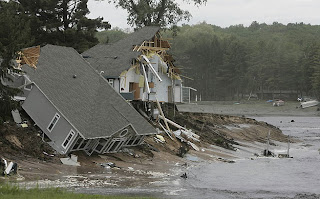 While in China the authorities are struggling to drain quake-created lakes behind rockfalls and mudslides, in Wisconsin Lake Delton, a man-made lake, washed through a narrow band of land separating it from the Wisconsin River and drained itself of 90% of its water, taking several houses with it and damaging others! Story from jsonline.com

Lake Delton - It was Tom and Tina Pekar's dream home - set on a little bay notched in the northeast corner of Lake Delton, just a couple of hundred yards from the Wisconsin River.

They moved there from Cudahy three years ago after retiring - Tom taught math, Tina worked as a recruiter for Midwest Airlines - and it sat on a beautiful spot.

On Monday, the house was a wreck, ripped from its site and tipped at a crazy angle where rain-swollen Lake Delton burst open, washing away three homes, shearing another in two and turning the once-sparkling body of water into a vast mud flat.

"It's unbelievable," Tom Pekar said, struggling for words Monday evening as he prepared to return once more to what had been his home. "I never in my wildest dreams thought that was going to happen. Never."

Who would have guessed it?

On Monday, it was all but drained within two hours after the shore gave way, less than a quarter-mile from the dam that controls the lake. The breach created a ferocious current as the water tumbled into the Wisconsin River 40 feet below. The failure destroyed homes and dealt a blow to an important piece of the Wisconsin Dells-area tourism industry just as the high season was about to open.

"We have nothing but mud in front of us now," said Tom Diehl, operator of the Tommy Bartlett Show, which features acrobatic water skiing on the lake. "No water. Just mud."

Owners of the dozen or so resorts that ring the lake, offering hundreds of rooms to visitors, were wondering what would become of their summer seasons.

"I called all my guests who were booked for the month of June, and I canceled out," said Linda Allessi, owner of the Sandrift Resort.

"Can you imagine families showing up here, coming down to the beach and wondering where the lake is?"

'Lake Delton's not there'
Among the larger properties affected is Wilderness on the Lake, a shoreline complex of 108 upscale resort condo units featuring lake views.

"The property's still fine," spokeswoman Heidi Fendos said, "but Lake Delton's not there."

Wilderness on the Lake is a relatively small part of the larger Wilderness Territory resort, the great majority of which sits apart from Lake Delton.

That's true for the Dells tourism sector generally. By far the largest part of Dells attractions, which line Highway 12 and downtown Wisconsin Dells, are unaffected. The same can be said for the area's many water parks and the natural rock formations along the Wisconsin River that first drew tourists to the Dells.

But for those on Lake Delton, it's another story.

"It's going to be a devastating impact on all the resorts (on) Lake Delton," said Diehl, who has long been a leader in the state tourism industry.

Gov. Jim Doyle, speaking near where the homes were washed away, said he would work to make sure affected residents get help needed from private insurers and state and federal government.

"We'll do everything we can," Doyle promised.

Meanwhile, Diehl, who is also a trustee on the Lake Delton Village Board, said village engineers were already studying how best to repair the gash in the lake.

"We're going to try to get that breach repaired as soon as possible and try to get water back in the lake," Diehl said.

Just how that might be accomplished - or when - is another question, and Diehl acknowledged Monday evening that he didn't have the answers.

"The breach is mammoth. It's probably 400 feet across. A lot of it is going to depend on what the DNR is going to require," he said, referring to the Department of Natural Resources.

Rain weakened sand
Although sandstone - the stone that forms the famed dells of the Wisconsin River - rings most of Lake Delton, it is absent at the spot where the shore gave way, Diehl said.

Instead, he said, the soil there is "100% sand" from the lake to the river a couple of hundred yards to the northeast. The heavy rains of the weekend turned the sand into a soggy mass that finally gave way about 10 a.m. Monday.

"What was mind-boggling was how quick it happened," said, Bob Wrzesinski, 74, who lives near where the lake washed out. "It makes Niagara Falls look like a backyard pond."

Wrzesinski was exaggerating, but this isn't the first time the geography of the Dells region has been reshaped dramatically over a short period.

Some 15,000 years ago, University of Wisconsin-Madison geography professor Jim Knox said, the Dells themselves were formed when an ice dam failed on glacial Lake Wisconsin, draining the huge lake in about a week and sending an incredible torrent of water surging down the course of the Wisconsin River.

"It's just like pulling the plug on the bathtub," Knox said of the deluge that cut the deep, curving gorges in the sandstone and created the Dells.

But those hit hardest on Monday, people such as the Pekars and their neighbors, Don and Darlene Kubenik, whose vacation home was sliced in two, weren't thinking about geologic history.

"We can't even rebuild because all of the land is gone," Darlene Kubenik, of West Allis, said as she stared at a kitchen wall that still held a framed but crooked picture.

The Kubeniks and the Pekars said they were unable to purchase flood insurance.

"We were told by the city that it wasn't needed because the lake is dam-controlled," Tina Pekar said. The dam held firm.

A 14-foot seawall that rose 3 feet above the water line "was supposed to protect us," Tom Pekar said. He said he and his wife followed DNR recommendations in siting their home.

For many years during their working lives, the couple vacationed in the Dells.

"We just loved it," Tom Pekar said, "and when my wife found a lot that we could afford, we built. Sold everything and built. It was a beautiful spot. . . . It was just a wonderful spot to sit and relax."