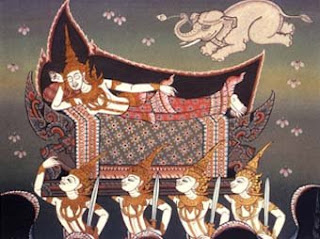 Guwahati, June 24: Tens of thousands of devotees from different parts of the country thronged the Kamakhya Temple for the three-day traditional fair, 'Ambubasi Mela' held here.

As per ritual, during the Ambubasi Mela, the main door of the temple remained closed for three days and all the religious activities were brought to a standstill.

The temple priests are forbidden to step into the temple leave alone the sanctum sanctorum following the belief that during this period, the presiding deity Goddess Kamkhaya undergoes her menstrual cycle.

"During this time all Hindu temples remain closed during this time. At this time no kind of farming work is undertaken. Be they Shudras, Kshatriya, Vaishyas or Brahmins, none of them cooks food at home and remain on a fruit diet. This is the significance of the Ambumasi," said Nayan Sharma, the priest of the Kamhakya Temple.

At the conclusion of three days, the temple's doors are reopened after Devi Kamakhya is bathed and other rituals are performed religiously by the priests. It is described as the Mother Earth retrieving her purity.

The devotees are allowed to enter the temple to worship Devi Kamakhya only on the fourth day.

The ceremony that lasted till Tuesday this year is believed to be purely a ritual of the Tantrik cult and observed to fulfill certain obligations.

Sadhu Surpanj Baba, a hermit said: "Some visit the temple for devotion, some come to fulfill their promises and to all the Devi Kamhakya showers Her blessings for their aspirations to come true."

Kamakhya is an aspect of the Goddess Sati or the wife of Lord Shiva. The temple in her honour exists in the Kamrup district here. The temple is one of the 51 holy Shakti Peethas related to Sati.

Sati
Kali as the dangerous Virgin Bride of India's svayamara ceremony. The same name was applied to Egypt's similarly archaic Virgin Huntress, once the ruler of the first nome of Upper Egypt (on modern maps, this means southern Egypt), called "The Land of Sati." Her holy city was Abu, the City of the Elephant (the Greeks' Elephantine), where she was worshipped in conjunction with the elephant god, who also mated with the Hindu version of Sati under her "magic" name of Maya, to beget the Enlightened Son of God, Buddha.(1)

India still has pilgrimage centers known as Footprints of Sati, memorials of the time when the Goddess waled the earth.(2)

The two tusks depicted on 1000 year old (and older) Islamic chess pieces of the "vizier," "farzin" or "wazir" evolved into the Bishop's mitre (in Western chess) as the Arabic version of chess spread into Europe and was adopted by the European royal courts.

The history of the Bishop's mitre and its symbolism adapted from the ancient sacred "horn" is interesting in and of itself! Suffice to say for purposes of this post, it also represents an ancient symbol of authority and power. If you can visualize what a modern Bishop's headdress (Mitre) looks like, you can readily find examples in the great White Crown of ancient Egypt and in simultaneously ancient (and perhaps even earlier) representations of the elongated pointed crown (sometimes shown as a pointed "fish head") in Sumerian iconography.

Keep your eyes on the tusks and horns...

In archaic Egypt, sacred structures of worship were constructed of wood and woven reeds/grass. Elephant tusks were hung above the primary entrance. These structures were called (working from memory so this may not be 100% accurate) per-u, per-wu, per-wer, from which the term "Pharaoh" was later derived. It means something like "house of ..." or "house."

Is there a connection between ancient Egypt and the ancient Indian civilizations as Walker confidently asserts in her information about Sati? Consider this:

Notice the similarity in the ancient Egyptian word abu, ebu, yebu (Coptic ebou, from ancient Egyptian ‘bw) and Sanskrit ibha. This lends credence to Walker’s assertion that the Indian Goddess Sati (an aspect of Kali) was also the Goddess of Egyptian Elephantine! According to Easton’s 1897 Bible Dictionary, the word _habbim_ is derived from the Sanscrit _ibhas_, meaning "elephant," preceded by the Hebrew article (ha); and hence it is argued that Ophir, from which it and the other articles mentioned in 1 Kings 10:22 were brought, was in India.