I did a Google news search tonight under Hou Yifan's name to see if any English-translated newspapers are picking up on her battle for the WWCC in Nalchik (where?) - and didn't find a damn thing! Chessbase reports, The Hindu reports, The Daily News and Analysis (India) reports, even USCF reports - but nothing in Xinhua showed up. See the Game 3 report from Chessbase on the final between Hou (white) and Kosteniuk (black) that took place earlier today: 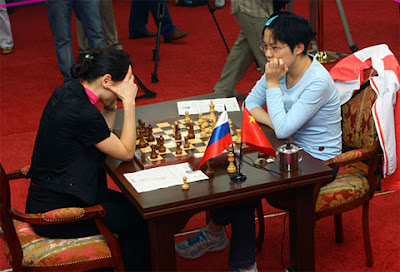 Nalchik Final: Kosteniuk leads 2:1, needs just a draw17.09.2008 – The third game of the Women's World Championship Final was a tough, 72-move draw. That left Russian GM Alexandra Kosteniuk in the lead with 2:1 points. On Wednesday the 14-year-old Chinese has to win with black in the last game to force a tiebreak. Kosteniuk can pick up the title with a draw. The game starts at 15:00h local time (GMT +3). You can watch it on the Playchess server. Photo: Final, Kosteniuk behind the black pieces on move 12.
Posted by Jan at 8:43 PM