I Have a Problem with This Story... 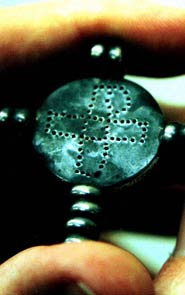 From The Times Online.UK September 19, 2008 ‘Ancient’ Christian amulet exposed as modern hoax Simon de Bruxelles A silver cross regarded as one of the most important early Christian artefacts found in Britain is a modern fake, scientists confirmed yesterday. The Chi-Rho Amulet, which bears an early Christian symbol incorporating the first two letters of Christ’s name in Greek, was found in a 4th-century Roman grave near the Somerset town of Shepton Mallet in 1990. Tests carried out by Dr Matthew Ponting, from the University of Liver-pool, revealed that the silver used to make the cross is of 19th-century origin. The test, using inductively coupled plasma atomic emission spectrometry (ICP-AES), examined impurities in the metal. It also established that silver used to make the cross and the pierced disc that bears the Chi-Rho inscription comes from two sources. Suspicion is focusing on protesters who opposed construction of a vast drinks warehouse on the site beside the Fosse Way, an Ancient Roman road. The discovery of the amulet 18 years ago caused a sensation in Shepton Mallet. An entertainment complex and a street were named after it and a replica was presented to George Carey (now Lord Carey of Clifton), who wore it at his enthronement as Archbishop of Canterbury in 1991. Marsh, deputy leader of the town council, said: “It’s like the magic has been removed from Shepton Mallet. I’m not sure there’ll be any need to change any names in the town but it’s a shame the myth of the amulet has now burst. “It was part of the town’s claim to fame, though the revelation that it’s a fake won’t come as a surprise to many people. When the amulet was first discovered it was felt it may have been placed there as a joke. But we’re still proud of Shepton and its Roman heritage.” Stephen Minnitt, acting head of the Somerset museum service, said: “Following detailed analysis of the Shepton Mallet amulet Somerset County Council can confirm that the artefact is almost certainly not the rare Christian artefact it was first believed to be. Experts are now 99 per cent certain the amulet is not genuine.” He appealed for the faker to come forward to solve the mystery. “It was deliberately planted. It didn’t get there by accident. There was a lot of local concern over the fact that the site was being destroyed and there was quite a lot of local opposition.” He said the hoaxer would not be punished. “There is no threat to them. They haven’t committed a crime or anything. It would be good to bring the story to a conclusion. We would be delighted if someone came forward and told us why and what happened.” The amulet is believed to have been copied from a genuine but little-known Roman brooch presented to the British Museum in 1954, implying a degree of specialist knowledge. The amulet was found in the grave of a man in one of 16 burial plots in the Roman cemetery. Peter Leach, who led the Birmingham University Field Archaeology Unit that carried out the excavation, said that he did not suspect any of his 40-strong team of planting the amulet. “There is absolutely no question it was anybody to do with the archaeological team,” he said. “I was there when it was found. There was never any doubt about its provenance as it was in a genuine Roman burial.“A local group might have had an agenda to place an object there in the hope that an archaeological find would stop the development.”
*******************************************
This cross was found at a bonafide archaeological dig in 1990. How the heck did it get there? Was it just left behind on the surface one night by a prankster and the next day the diggers showed up and said oh lo and behold, a new artifact? Hmmm..... So perhaps it was buried underground in - as it turns out - a 4th century Roman grave. Coincidence? And why did the people working on excavating this particular grave NOT NOTICE that the dirt had been disturbed? I mean, darlings, don't you think the dirt would have been disturbed if you were intent on burying an object in a grave that wasn't there originally??? How else could it have been done - was it shot into the ground with a gun? (That's a joke). So, you're brushing away on this grave for weeks and weeks (because that's what the "diggers" often use - brushes) and you don't notice any disturbance in the dirt at your dig that suddenly shows up overnight? Hmmm....
Posted by Jan at 10:51 PM