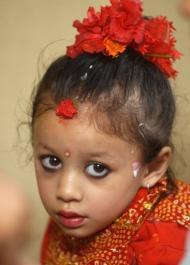 Nepalese girl begins life as 'living goddess' 2 days ago KATHMANDU (AFP) — The three-year-old daughter of a Nepalese watch repairer became a "living goddess" on Tuesday after being approved by the country's new atheist government. Despite Nepal being a Maoist republic after the monarchy was unseated in May, the centuries-old tradition of worshipping a young virgin as the living embodiment of a powerful Hindu goddess has survived. "Matina Shakya was chosen after consultation with Buddhist priests, community leaders and officials who will look after her," said Achyut Pokharel, a member of the government-run trust that maintains the tradition. "She became Royal Kumari after a series of pujas (religious ceremonies) on Tuesday at the auspicious time of 11:39 am," Pokharel said, referring to the moment chosen by astrologers as the luckiest for the Kumari succession. Dozens of people in Kathmandu's medieval quarter joined in the procession as the young girl was carried by family members from her home to the ornate palace where she will be confined for several years. "It was very hard to make the decision to allow her to become the Kumari," her father Pratap Man Shrestha told AFP. "I am going to miss her terribly but it is a great privilege to have a Kumari for a daughter and we are helping maintain a unique, age-old part of our culture." Tradition dictates that the Kumari must only leave her new home for festivals a few times per year. Earlier this year, Nepal's Supreme Court ruled that Kumaris had the right to attend school but her family accepts that she will stay in the ancient palace in central Kathmandu. "She will be home schooled in the palace but we can go and meet her any time," said her father. Three-year-old Matina remained silent throughout the ten-minute procession to begin her life as a goddess and seemed unperturbed by the commotion, posing happily for pictures. Preeti Shakya, 12, the previous Royal Kumari, was in floods of tears as she was led out of the palace and back to her family by a band playing curved horns and banging drums. Her term ended because she was approaching menstruation, after which she would be ritually unclean. As she watched the new Kumari being taken to the palace, Aaste Shakya, a Norwegian married to a Nepalese man, said she respected the tradition but felt sorry for the girl. "She can't have a normal childhood. She won't have the same freedom, schooling and social activities as everyone else her age," said Shakya. "She is too young to really understand what is happening to her." The Kumari, which means virgin, must meet 32 strict criteria -- including having a "chest like a lion" and "thighs like a deer" -- as well as pass tests that include being in a room with dead sacrificed buffalo and not crying. Three towns in the Kathmandu valley follow the custom, but the Royal Kumari in the capital is considered the most powerful, and has the closest links to Nepal's deposed monarch. Former monarch Gyanenendra and his ancestors would seek annual blessings -- and tacit spiritual approval of their reign -- from the girl selected from the Buddhist Shakya caste. Today, Gyanenendra is a commoner living as a virtual recluse on the outskirts of Kathmandu, and the Nepalese president now receives blessings from the girl. Nepal became the world's newest republic after former rebel Maoists ended their civil war in 2006, and won landmark polls in April.
Posted by Jan at 8:19 PM