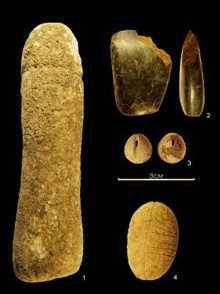 Hmmmm - I have to say it - I think only one of these artifacts resembles a penis. One looks like a proto-Egyptian scarab, two look like vulva or sea-shells (that were used for currency and also represented the female genetalia), and one looks like a hand tool, maybe an axe or an awl. Well, whatever - I'm no expert, darlings, and that's a fact. But the experts aren't so good at this stuff either! From Discover Magazine Blog Archaeological Surprise: Grave Site Full of Phallic Figurines September 8, 2008 Archaeologists excavating a burial site near Nazareth dating back to between 6750 and 8500 B.C. found the area littered with shells, axes, and other artifacts—no surprise there. But something else also caught their attention: a high number of phallic figurines. It’s not unusual to find reproductive-themed artifacts in grave sites from this period, says study leader Nigel Goring-Morris of the Hebrew University. But this period of history, not so long after the agricultural revolution, typically produced more female figurines, associated with the fertility of the land. Even though most of the 65 people buried in this 10 meters by 20 meters plot were young men, he says, the finding is an odd one. Goring-Morris speculates that these guys were trying to reclaim their manhood. With societies at the time moving from being hunter-gatherers to farmers, he says, men lost some of the macho feeling: Let’s face it, plowing a field just doesn’t get the testosterone flowing as much as killing a gazelle. There’s no real evidence that these men felt that way, but the possible alternative explanations for carving a bunch of phalluses are perhaps more unsavory. In any case, farming—and female fertility imagery—won out in the region. But every time a group of men jump in a freezing lake or embark on a disastrous camping trip to reassert their manhood, they can rest assured that they might just be carrying on a millennia-old tradition. Image: Nigel Goring-Morris
Posted by Jan at 7:39 PM