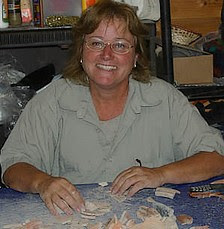 Sep 25, 2008 10:18 Updated Sep 25, 2008 10:19 Archeology: Dr. Eilat Mazar: The Bible as blueprint By ETGAR LEFKOVITS She has been at the forefront of a series of back-to-back Jerusalem archeological finds, including what she believes is the biblical palace of King David, a discovery which led her to international prominence. She has also been at the epicenter of a public campaign against Islamic destruction of antiquities on the Temple Mount, and has repeatedly and unflinchingly criticized - and clashed with - the Israel Antiquities Authority for overlooking and turning a blind eye to the past desecration of Judaism's holiest site, which has earned her the reputation of something of a black sheep in the local archeological world. Meet Dr. Eilat Mazar. The no-nonsense 51-year-old mother of four, a strongly secular Zionist who comes from a venerated family of archeologists - the most prominent of whom was her grandfather, the pioneering Dr. Benjamin Mazar, who carried out the excavations around the Western Wall area after the 1967 war - has emerged as one of the country's leading archeologists. Over the last several years, her ongoing dig in the City of David just outside the walls of the Old City has proven to be a treasure trove. In addition to the potential biblical palace - which has been dubbed as the find of the century by some and dismissed by others in the bitterly competitive local archeological community - Mazar has discovered two seal impressions belonging to ministers of King Zedekiah which date back 2,600 years, as well as the remnants of a wall from the time of Nehemiah. Mazar, who is both revered and reviled by some of her colleagues for being a "biblical archeologist," says that the Bible is unquestionably the most important historical source for her work, since it contains a "genuine historical account of the past." "I work with the Bible in one hand and the tools of excavation in the other," she says. "The Bible is the most important historical source." Despite her early experience with archeology as a teenager under her family's tutelage, Mazar didn't decide to become an archeologist until after her army service, when she enrolled in courses at the Hebrew University, where she would eventually earn her Ph.D. She calls her university years - during which she had her first child - an "immense delight," a time when she and her fellow students would run to any place in the country where an excavation, no matter how modest, was under way. Balancing a career with family has not been easy. Mazar married right out of the army, had a child and then divorced. Later she found new love, archeologist Yair Shoham, and the couple had three children. Tragically, Shoham died suddenly of a heart attack in 1997 at 44. Mazar says her family is a critical component of her work. "My family gives me the strength to do what I do," she says. "I see my work as a complete life." Three decades after the thrill of her university years, the excitement is still palpable within - and radiates from - Mazar as she continually uncovers the past. "It's nice to touch your history," she concludes.
Posted by Jan at 7:55 PM

Since I do not read Portuguese I took the liberty of doing an Altavista Babelfish translation of your comment:

Because people exist who do not believe what he is obvious? She has a time behind did not believe that Babilônia or Ur of the Chaldean had existed only because it is written in the bible and today nobody doubts its existence. The skeptics are true idiots!

I tend to agree with you that skeptics of historical accounts in the Bible are often idiots (by historical I mean geographic information and historical information that can be pinpointed by reference to events outside of Jewish and/or Christian religious traditions), because they are blinded by religious prejudices.

I am not clear on what the first part of your comment meant. Are you saying that at one time, Dr. Mazar did not believe in the existence of Ur of the Chaldeans because it was mentioned in the Bible? Or are you referring to other people?