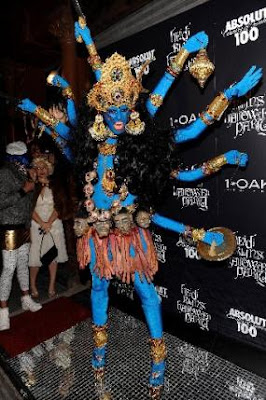 Heidi Klum in trouble for Kali costume Indo Asian News Service Tuesday, November 4, 2008 (New York) Pics: Heidi leads Hollywood's Halloween gang (Photo: From San Francisco Gate "Daily Dish", November 3, 2008) Supermodel Heidi Klum has stirred a controversy by dressing up as Hindu goddess Kali for a Halloween party, with some Hindus seeking an apology from her and others asserting that she did nothing objectionable. The Halloween party here was thrown by Klum and attended by many celebrities. The German celebrity wore a goddess Kali costume while her husband, singer Seal, dressed up as Angulimaal - an Indian mythical character who used to chop off people's fingers and wear them as a necklace. Klum, who was in India last year along with Seal, told reporters at her annual bash that the idea of dressing up like goddess Kali was that of her secretary."My husband and I were in India last year, so she said, 'Why don't you do an Indian goddess? Like a scary Indian goddess?' And I said, 'Ok'," Klum was quoted saying. After this, her secretary did some Google search and showed her a picture of goddess Kali."I loved it because she's so mean and killed all these different people and had fingers hanging off her and little shrunken heads everywhere," Klum said. Nevada-based Hindu priest Rajan Zed, in a statement issued Monday, demanded the supermodel tender a public apology for dressing up as goddess Kali. "Goddess Kali is highly revered in Hinduism. She is meant to be worshipped in temples and not to be used in clubs for publicity stunts or thrown around loosely for dramatic effects," Zed said. However, there are others who feel otherwise. Kirit Desai said: "It is in good taste, if we could tune it in properly."In an online discussion, Ashish Dimri said: "We all know Heidi and Seal are fascinated by Hinduism. Maybe she did not know implication of her innocent act."Shamita Dasgupta said Heidi's dress reminded her about the Bengali tradition in which adults and kids dress up as deities, including goddess Kali and parade around. "This shouldn't pose a problem," she said.
Posted by Jan at 8:45 PM

i myself is offended by what she did.....she didnt have the right.....it was never a traditional costume just as the witch, vampire, goblin, etc. she is making a mockery of the goddess and i disagree......yet again we cant do anything bout it.....but her secretary should have more research and know better of what mother Kali does......Mother Kali is not a demon!! she destroys them