More on the Female Shaman Burial 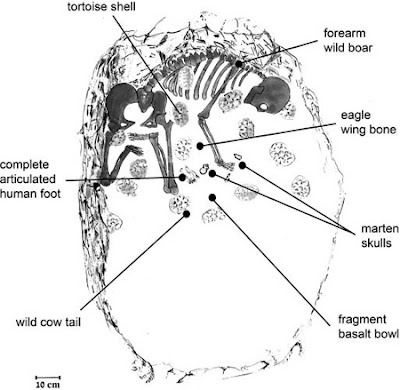 Follow-up post (see below for initial post)
Here's an image and further explanation/description of the find.
Ancient Grave May Have Belonged to Shaman By Michael BalterScience
NOW Daily News
3 November 2008
Before there were priests or doctors, people seeking solace or treatment for an illness often called in a shaman, an intermediary between the human and spirit worlds.
Archaeologists working in Israel now claim that a 12,000-year-old grave of a woman buried with various animal and human body parts is that of an early shaman. If true, it could mean that shamanism arose during a critical period in human cultural evolution.
Although largely supplanted by organized religion, shamanism is still widespread in Asia, Africa, Europe, and the Americas. For example, many Eskimo groups around the Arctic Circle practice shamanism. The roots of shamanism reach back at least to the ancient Greeks and possibly even to prehistoric times. Many archaeologists assume that shamanism preceded organized religion, and some see depictions of shamans in cave art from 15,000 years ago or earlier--although that interpretation is controversial.
But recent excavations at Hilazon Tachtit, a cave west of the Sea of Galilee in Israel, may provide new support for prehistoric shamanism. Hilazon Tachtit was occupied by the Natufians, a people who inhabited the Near East between about 15,000 and 11,500 years ago. Most archaeologists see
Natufian culture as a transition between hunting and gathering and the sedentary lifestyles of early farmers. At Hilazon Tachtit, a team led by archaeologist Leore Grosman of the Hebrew University of Jerusalem has found the remains of at least 25 people, most in collective burials. But one was treated differently. A woman, about 45 years old when she died and whose pelvis and spine were deformed, was buried separately, accompanied by a menagerie of animal remains. Among her grave goods were tail bones from wild cattle, a wing bone from a golden eagle, the shells of 50 tortoises, and a large foot from another person.
The team, which reports its findings online today in the Proceedings of the National Academy of Sciences, notes that tortoises, cow tails, and eagle wings play a role in the ritualistic practices of many shamans today and that many societies ascribe special powers to physically disabled people. "It seems that the woman in the Natufian burial was perceived as being in a close relationship with these animal spirits," the authors write. They suggest that shamanism either sparked, or was the result of, the cultural upheavals that accompanied the agricultural revolution in the Near East.
"This is an extremely important report on a rare find at a critical time of cultural evolution," says Brian Hayden, an archaeologist at Simon Fraser University in Burnaby, Canada. Ian Kuijt, an anthropologist at the University of Notre Dame in South Bend, Indiana, adds that the "authors have done an excellent job of supporting their argument" for prehistoric shamanism. But Mina Evron, an archaeologist at the University of Haifa in Israel, cautions that there may be alternative explanations, though she doesn't offer one herself. Just because the team's "colorful interpretation" seems plausible, she says, "it ain't necessarily so."
Posted by Jan at 6:54 PM