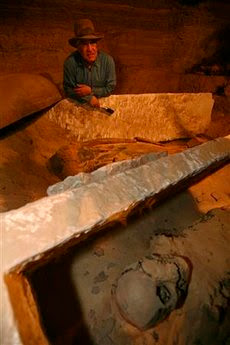 Like a first grader who has to pee and hops from one foot to the other broadcasting his intentions, Zahi Hawass just couldn't wait, and foolishly opened the rare intact sarcophagus recently discovered in a Saqqara burial chamber (along with as many as 29 other mummies, including the mummy of a dog). I hope the ghost of that mummy haunts the jerk for the rest of his life! This is an act of gross malfeasance, done purely for the publicity. Opening such a rare prize in totally uncontrolled conditions! What a schmuck! The Egyptians should run the dude out of office and strip him of his fancy title and salary. And he calls himself a scientist, an egyptologist. Ha! (Image: photo credit (Mike Nelson/Pool/Reuters) The idiot Hawass poses in a corner of the burial chamger while the skull of the mummy is exposed to an uncontrolled environment. It would serve him right if that mummy disintegrates before they can get it to Cairo.) Egypt finds rare intact mummy near Saqqara pyramid By Cynthia Johnston Cynthia Johnston – Wed Feb 11, 9:48 am ET SAQQARA, Egypt (Reuters) – Egyptian archaeologists found a rare intact mummy dating to pharaonic times when they opened a sealed limestone sarcophagus on Wednesday in the shadow of the world's oldest standing step pyramid at Saqqara. The well-preserved mummy, which escaped plunder by thieves in ancient times, could contain scores of gold amulets in the folds of its linen wrappings, Egypt's chief archeologist Zahi Hawass said. "It is a typical mummy of the 26th dynasty...This mummy should contain amulets, golden amulets, to help the deceased go to the afterlife," Hawass told reporters after ascending from the mummy's burial chamber, accessible only by a rope pulley. "To find an intact mummy inside a limestone sarcophagus is not common. It's rare. It's very rare," he said. Archaeologists found the ancient mummy when they removed the lid of its sarcophagus deep in a burial chamber in the desert on the western side of Saqqara, about 20 km (12 miles) south of Cairo. Thirty other mummies were also found in the same room. The 26th dynasty ruled Egypt from about 664 to 525 BC, immediately before Persians occupied the area. Hawass said the mummy found in the sarcophagus, believed to be the original owner of the burial room, would undergo scans to determine if it did contain amulets. It is unusual to find intact burials in well-known necropolises such as Saqqara, which served the nearby city of Memphis, because thieves scoured the area in ancient times. MORE TOMBS COULD BE FOUND Hawass said the mummy's burial room, built via a shaft next to a much older burial chamber, was one of three tombs archaeologists had recently unearthed near Saqqara that were thought to be part of a much larger cemetery. "I always say that we have found 30 percent of the Egyptian monuments, and still 70 percent is buried underneath the ground," Hawass said. "We expect to discover more tombs. You have to wait. Every week (there) will be a tomb to be discovered in this area. This is the beginning of the cemetery," he said. The identity of the main mummy found in the tomb was not known, but Hawass said he would have been wealthy. The lid of his sarcophagus was cracked, but Hawass said it had been sealed with mortar in antiquity, preserving the mummy. "If a mummy is inside the limestone sarcophagus, it means this person is rich," he said. Of the roughly 30 mummies found inside the burial chamber alongside the limestone sarcophagus and its mummy, Hawass said some would have been poor and some wealthy. They may have been relatives of the original owner. Most of the additional mummies were found in niches in the walls of the burial room, about 11 meters (34 feet) below ground level, and they included four mummies buried with a dog. But the finds also included two anthropoid wood coffins with hieroglyphic inscriptions. Hawass found a 26th dynasty mummy in one of the wood coffins when he opened it on Wednesday after brushing away loose sand. The other wood coffin was deemed too fragile, and would be opened later after conservation efforts. (Writing by Cynthia Johnston; Editing by Angus MacSwan)
Posted by Jan at 7:52 PM

You clearly know nothing of archaeology. What did you expect when the sarcophagus was opened in what you call an uncontrolled environment ? That the mummy would turn to dust and blow away in the wind ? And then you suggest that Dr. Hawass should be sacked as a result. I guess that's the problem with blogs - it allows ignorant people to mouth off on subjects of which they know nothing. Blogs also allow people with no creativity to cut and past entire news stories and photographs with no regard to copyright.

Oh you're a brave one, aren't you - Anonymous!

If Hawass would cease his tired Indiana Jones imitation I'd have a lot more respect for the man. Staging events like this just makes him look ridiculous. I stand by my comments about lack of proper protocols being in place when he opened the sarcophagus. Of course, he may have utilized proper procedures much earlier and so he knew what he would find when he opened the sarcophagus, in which case he's merely guilty of blatantly defrauding a goggle-eyed and naive public instead of professional malfeasance.