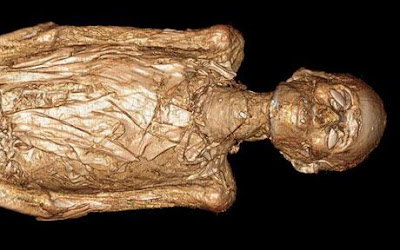 Story from the Telegraph.co.uk Images of 3,000-year-old Egyptian mummy revealed by scanner Spectacular images from within the unopened casket of a 3,000-year-old Egyptian mummy have been revealed using a hi-tech hospital scanner. Last Updated: 11:48PM GMT 08 Feb 2009 The elaborately decorated coffin contains the wrapped remains of Meresamun, a woman believed to have been a singer-priestess at a temple in Thebes in 800 BC. Experts do not want to disturb the casket, which has remained sealed since Meresamun was laid to rest almost 1,000 years before the birth of Christ. But now cutting edge X-ray technology has allowed scientists to peer through the coffin and obtain astonishing 3D images of the mummy, still wrapped in her linen bandages. A state-of-the-art computed tomography CT scanner was used to peel away the layers and reveal Meresamun's skeleton. The mummy's remaining internal organs can be seen, as well as what appear to be stones placed in her eye sockets. Egyptologist Dr Emily Teeter, from the University of Chicago's Oriental Institute Museum, where a new exhibition featuring the mummy and CT images opens tomorrow, said: "It is so exciting to be able to see this. The mummy is still in the coffin. It is like having X-ray eyes to see the relationship between the coffin, the wrappings and amount of linen used." Meresamun's identity is unclear. Her name, shown in an inscription on the casket, means "She Lives for Amun" (an Egyptian god). According to the inscription she served as a "Singer in the Interior of the Temple of Amun", one of a number of priestess-musicians who performed during rituals dedicated to the god. Meresamun was one of the higher ranking "interior" singers, some of whom served members of the Egyptian ruling family. The scans suggest she was about five foot five inches tall and aged in her late 20s or early 30s when she died. She was an attractive woman with wide-set eyes, a symmetrical face, prominent cheekbones and a long neck. The cause of Meresamun's death is unknown, and all the more mysterious since she appears to have been in exceptionally good health. The state of her bones shows she enjoyed a nutritious diet and active lifestyle. Although she bore no signs of dental disease, her teeth were worn down by the grit in Egyptian bread, which was made from stone-ground flour. Early analysis suggests she had not given birth to any children. The sealed casket was bought in Egypt in 1920 by James Henry Breasted, founder of the Oriental Institute. The coffin, made from cartonnage - a type of papier mache composed of layers of fabric, glue and plaster - is colourfully painted with pictures of gods and symbols and hieroglyphics relating to life after death. Earlier attempts to carry out scans of the casket in 1989 and 1991 produced disappointing fuzzy images. The new images were obtained using a Philips Brilliance iCT scanner, one of the most advanced available. The machine scanned 100 cross-section slices of the mummy per second, generating 30 billion individual measurements and producing 1,000 times more raw data than was collected in 1991. US radiologist Professor Michael Vannier, who led the scanner team, said: "The iCT scanner allows us to perform detailed analysis of very complex anatomy within seconds. "The pictures of the mummy are breathtaking, we could see subtle things - wear patterns on the teeth, a clear view of the embalming incision, precise indications of her age - that were not apparent before."
*******************************************
Also see a full story on the scan at Archaeology Magazine online. dondelion and I were pleased to attend a lecture by Dr. Emily Teeter at the Milwaukee Public Museum - 2004 or 2005, forget exactly when, in conjunction with the mega-hit exhibit "The Quest for Immortality." We were both impressed with her lecture and her obvious depth of knowledge, but she was very approachable.
Posted by Jan at 7:04 PM