The Eternal Female: Worship of the Mother Goddess 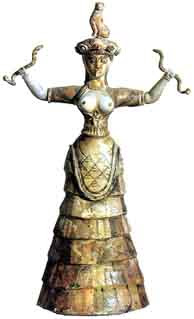 There's a book you should read called "The Myth of Matriarchal Prehistory: Why An Invented Past Will Not Give Women a Future." It was written by feminist author Cynthia Eller expressly for the purpose of debunking the entirely invented notion that prehistoric societies were matriarchal or matrilineal - there's no compelling evidence of either. Why would a feminist author write such a work? The answer is in title of the book - invented histories and mythologies can't solve problems or empower those who believe in them. The matriarchal pre-history myth was a whole cloth fabrication without historical backing or evidence. Anyone basing a world view on this fabrication is grounding their understanding of the world in a lie, with all the problems that entails. You can't build a positive future for yourself if your understanding of the past is based in known falsehoods and fabrications. Cynthia Eller knew this and cared enough about women (and men) to want to dispel the prehistoric matriarchy myth so that both genders could approach an honest understanding of each other and their places in history. If you also believe that women - and men - are best served by an understanding of the world based in truth, then I challenge you to critically examine your belief in this myth. You can start with the links below:

Amazon.com link to the book:
http://www.amazon.com/Myth-Matriarchal-Prehistory-Invented-Future/dp/080706792X

Chapter 1 of the book:
http://www.nytimes.com/books/first/e/eller-myth.html

Thanks for the book link. I'm sure some people will be interested in looking at it but it sounds like a crock to me.

I doubt very much that most women today base their "world view" on what happened in prehistoric times, so I view Ms. Eller's premise in writing the book somewhat askance. Most women don't give a rat's butt about what happened before they were born, let alone 40,000 years ago. The issues of gender discrimination against females in the world I and my contemporaries live in right now won't be solved by goddess worship or whether there is evidence for the ancient practice of matrilineal succession and matriarchal cultures; but if such beliefs, regardless of what you think about them, empower some women to feel better about themselves, all the better.

You might find this footage of a performance of the Hymn of the Kouretes from the Palaikastro hymn in Crete to be of interest :