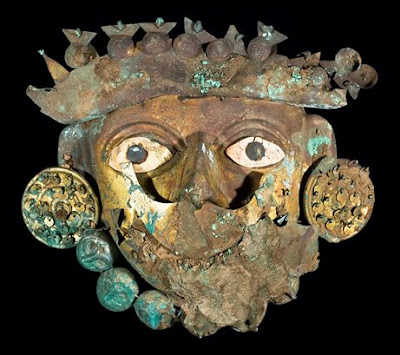 Article from the National Geographic News: "King of Bling" Tomb Sheds Light on Ancient Peru Kelly Hearn and Ted Chamberlainfor National Geographic News April 10, 2009 Image: Found in a treasure-filled tomb of the Moche culture in Peru in June 2008, this 1,500-year-old gilded-copper-and-seashell funerary mask was one of two that shielded the face of the so-called Lord of Ucupe. As in his tomb, the Lord of Ucupe in life would have been covered nearly head to toe in shining metal, so as to dazzle and distract his subjects—"This is the king of bling, literally," one archaeologist says.Photograph courtesy Dr. Steve Bourget Packed with treasure in the styles of two ancient orders, the 1,500-year-old tomb of the Moche Indian "king of bling" is like no other, according to archaeologist Steve Bourget. Discovered in Peru at the base of an eroded mud-brick pyramid, the tomb gradually yielded its contents last summer. Among the finds: 19 golden headdresses, various pieces of jewelry, and two funerary masks, as well as skeletons of two other men and a pregnant woman. (View photographs of the Moche find.) The tomb's mysterious contents and location—far from known Moche capitals—could shed new light on this little-known culture of Peru's arid northern coast, said Bourget, of the University of Texas at Austin. Thriving between A.D. 100 and 800, the highly agricultural Moche Indians are known in large part by their stepped pyramids, jewelry-filled tombs, and exquisite pottery and art. (See related pictures of Moche tombs from National Geographic magazine.) Lord of Ucupe Located some 475 miles (750 kilometers) north of Lima, the new-found tomb was found at the base of Huaca el Pueblo, a mud-brick, stepped pyramid that has eroded into a high, round mound. The Lord of Ucupe—as locals have come to call the entombed Moche leader—was in his early thirties when he died, Bourget said. For entombment, the lord was dressed in full regalia—and then some. His body was covered with a tunic and train of tiny gilded copper plates, and his face was covered with two funerary masks—a first, according to Bourget. A necklace of four-inch (ten-centimeter), disk-shaped silver rattles encircled his neck. On his head was a gilded crown. Six more crowns and ten V-shaped headdresses called diadems were arrayed on top of his body. Still another diadem was folded in half and placed atop six metal war clubs to serve as a mat for his lifeless body. The Lord of Ucupe was then wrapped in a large bundle made of reed and textile, along with artifacts suggestive of political status, said Bourget, who co-led the team that found the tomb with Bruno Alva of the Museum Tumbas Reales de Sipán. Rest of article.
Posted by Jan at 10:57 PM