(Image: From Flickr, showing Queen Ketevan's torture. I don't know what the source of this image is). 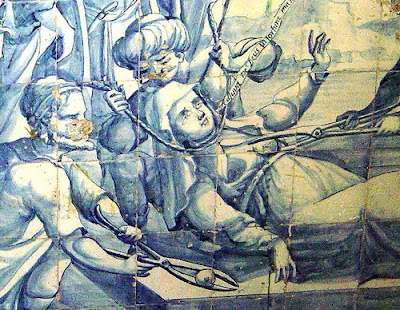 Scientists have conducted a DNA analysis on bones believed to have been relics of Georgian queen Ketevan preserved in St Augustine's complex at Old Goa, but the mystery continues as a matching analysis of her other relics in Georgia needs to be done to confirm the findings.

The Archaeological Survey of India (ASI), Goa, received the DNA report recently from the Centre for Cellular and Molecular Biology, Hyderabad.

"We were able to isolate the ancient DNA but the amplification and sequencing needs to be done following a different protocol, which is still not commercially available in the laboratory, and we require an advanced kit to carry out a phase 2 analysis," N Taher, deputy superintending archaeologist, Goa said.

A matching DNA report of the queen's remains in Georgia will also help carry the research to its logical conclusion. "We are not very sure if the bone relics belong to the queen and we will request a Georgian delegation coming to Goa later this month to do a sequencing of their specimen for verification," Taher added.

Augustinian Friars, who also had their mission in Iran, came in contact with the Georgian Queen (1565-1624) in Shiraz, Iran, and held her in high esteem. She was put to death by Shah Abbas I of Iran in 1624 after several years of imprisonment for her refusal to give up Christianity. The Augustinian Friars exhumed her body after four months and took the relics to Georgia and interred them at the Alaverdi Cathedral, and also brought a hand and palm to Goa.

After the ASI started excavations to conserve the site at St Augustine's complex two decades back, in 2004-05, archaeologists found three bones in the chapter chapel in the convent of St Augustine. Bone relics of other dignitaries were also being preseved in six chamber boxes in the chapel.

"The remains of five chamber boxes can be seen at the site, except for the one with Queen Ketevan's remains," Abhijit Ambekar, an archaeologist said. A long bone was found below the second window within the chapel and two more fragments behind the second window close to the coping stone of the chamber box. Research will continue to find out whether the remains were also taken anywhere out of the complex, sources said.

St Augustine's complex crumbled after materials were sourced for construction elsewhere. It was also neglected after the Portuguese asked the Augustinian Friars to leave in 1835. The search for the queen's remains may take longer as relics in other tombstones may have to be examined, Taher said. "As scientific analysis is available, we may have to take up other specimens of bone relics for analysis."

The Georgian team comprises Fr R Georgi, dean of St Kethevan church in Tibilisi, capital of Georgia, and a team of archaeologists and media persons. Concluded Taher, "The Georgians are coming to Goa as they have an emotional tie with the events related to their patron saint and St Augustine's complex is significant to them."

May I thank the author and others for enabling us to read the text and see the picture. This angel-like lady headed the insurrection against shah Abbas among the Kartveli//Georgian nation. The painting is at the capital of Portugal, as much as I remember. There was a video of how A. Noneshvili, a historian from Tbilisi visited the former church of St. Augustine order and saw a large painting on the wall.My college Marine Tsintsabadze asked that historian to give her the photo of queen Ketevan for her scientific paper. He refused, she told me. Now she will have the photo. Qetevan is in the soul of ethnic Kartvels//Colkhians and every day her virtue is remembered among many Kartvels. Every week shah Abbas is remembered as a monster. Strange enough that his grandmother was an ethnic Kartveli.

The picture representing the martyrdom of queen Ketevan of Georgia, is not a picture, but a large mural of "azulejos"(ceramic tiles) that ornate a large and beautiful room in the convent "Nossa Senhora da Graça" in Lisbon, Portugal. This convent belonged to the order of Agustinian monks, the same order that was present in Goa, India, in the 1600.

Thank you for the additional information on the source of the image of Queen Ketevan. She is an inspiring figure, I can only marvel at her tremendous courage and faith.