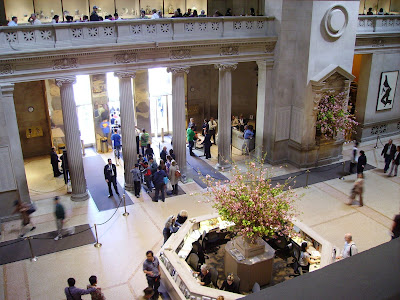 Yesterday we spent the entire day at the Met. (The Great Hall at the Met, shot from the balcony overlooking the main entrance) There was a walking tour with lecture on ancient Egyptian medicine that dondelion and I wanted to do at 10:00 a.m. We arrived about 10 minutes before the start and were the first ones waiting in the gathering area for the group. Dr. David Minninberg of the staff was to give the presentation. There was an older gentleman standing in the same area and dondelion, who never listens to a word I say, asked him if this was the place to wait for the Egyptian tour, and the gentleman said yes, it was. It seemed that we three were going to be the only ones on the tour. I had a sneaking suspicion that the older gentleman was, in fact, Dr. Minninberg, but I didn't mention this to Mr. Don, who would not have listened to me anyway. But, about 1 minute before the tour was to start, several other people showed up. In all, I'd say there were perhaps 10 of us. About 1 minute after 10, the older gentleman stepped forward and introduced himself - he was Dr. Minninberg - and he escorted us across the great hall into the Egyptian wing. The tour was underway. 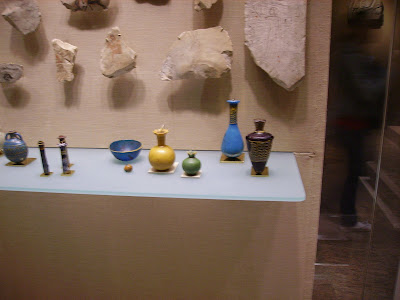 It was a fascinating hour. The group being small, we were all able to ask questions and our guide was entertaining as well as informative. I learned quite a bit I did not know before about ancient Egyptians and their practice of medicine, both practi cal and what we would call magic, and it was fascinating. (The yellow and green vases are shaped like pommegranites and were used for a special elixir made out of the seeds) The time flew by. Afterward Don and I stayed behind and had a chance to ask Dr. Minninberg a few more questions, and spoke with him for about another 15 minutes. Then I pulled Mr. Don away (he could talk about Egypt 24/7) and steered him back toward the rest of the Egyptian Wing, where we happily spent time until about 2:30 when we ran outside for a quick lunch break (New York hot dogs from one of the street vendors) and were entertained by a very talented street singer. We were back inside by 3 p.m., where we took in the exhibits of second floor balcony area that include Islamic art and artifacts from all along the Silk Road. Mr. Don took 115 photos yesterday - I don't remember how many I snapped. Mr. Don stayed on his feet longer than I did so he had more. I finally could not stand up another second more and I went back to the great hall, hoping to find a seat, while Mr. Don finished taking his photos. I was luck to snag a corner seat on one of the large high-backed benches, and was able to rest for about 15 minutes with my head back, eyes closed, ignoring the din around me, until Mr. Don reappeared at my side. 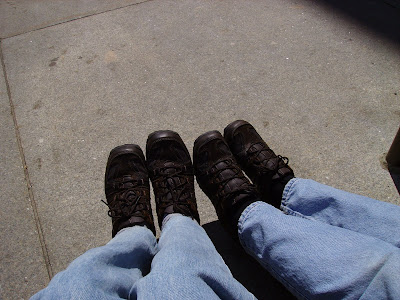 As usual, the walk back to the hotel did not seem as long as the walk to the museum that morning. It was only 4 miles round trip plus all the walking we did inside, but to me it felt like 40 miles! (Our feet - Mr. Don's are the long skinny ones, mine are the short fat ones) We got back to the hotel about 5:30 where we both promptly collapsed on the sofa; but I later ventured forth for food, located a grocery store and got some goodies, a drug store where I picked up a few items and stopped at McDonalds. We spent the rest of the evening watching t.v. I was too tired to do anything else. Goddess, that Big Mac sure tasted good! I haven't had one in a long time. I noticed last night that I got sunburnt on the "v" of my neckline, and my face was definitely pink! So much for the supposed sunscreen protection in my face cream and makeup! When we get back home I'll put up lots of the photos we took at Goddesschess.
Posted by Jan at 11:09 AM