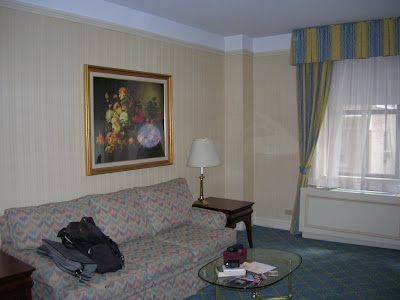 dondelion and I are here, and exhausted! We made it in one piece and Midwest Airlines got us here about 20 minutes early - amazing! (Here's our sitting room at the hotel) The shuttle ride from the airport to the hotel was as hair-raising as I remember from our 2005 visit, with maybe even more potholes. We arrived at the hotel about 2:30 p.m. and after settling into our suite we headed in search of the Applejack Diner (a major hang-out for us during out 05 stay and I knew it was only a couple of blocks away). Ach, totally turned around, I could not navigate us to Broadway. dondelion was getting cranky because he was hungry, so he asked some rather suspicious looking guys for directions while I wanted to ask someone at a nearby bus stop - turns out we were half a block away, LOL! Once we got to Broadway I was able to steer us to the restaurant where we ate and then headed out walking, first this way, then that, snapping photos along the way. 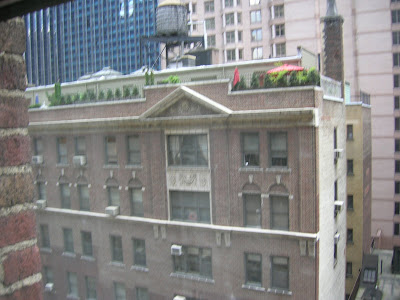 (A view from our hotel room) dondelion thinks that we can "save money" by using our suite's kitchenette. We have a mini-fridge, a sink, a coffee maker and a microwave. Frankly, I'm skeptical, but I'm willing to try to have at least some meals here rather than eating out. Walking back from the Hudson River from the areas of West 73rd and Riverside Drive (a whole different world from the bustle of midtown Mahanttan) we spotted a grocers and went in. We bought a few things, but no coffee fixings. As we got closer to the hotel I spied another grocer and a deli on the corner of 57th practically across from the hotel. I was willing to go there and check it out, but we wanted to get the groceries back to the hotel first. After that was done we both sat down to rest a bit; I turned on the t.v. and got out this netbook. After some putzing around I couldn't figure out how the wireless internet connection worked so I called the desk - I needed a password and login. In the meantime, dondelion had stretched out on the sofa and he's now shooting zzzzs at the ceiling. That's okay, I'm going to settle in and watch the grand finale of The Biggest Loser. I'm too tired to go out exploring Manhattan nlght life!
Posted by Jan at 6:42 PM