Spring in the Backyard 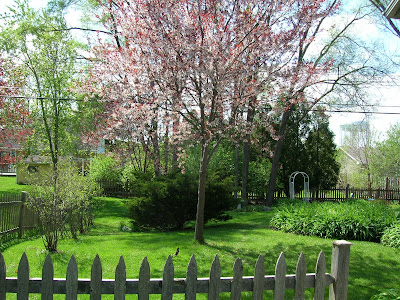 Mr. Don has been busy with chores around the house since he arrived. He has chopped and dug out dead shrubs, hauled away the mound of gravel and sand the mysterious creature dug out from underneath my driveway at the very front of the house, pruned shrubs, cut down trees, dug out dandelions and thistles, tried to repair my hose reel (he got rather wet this afternoon when it didn't work - and bad me, I laughed and laughed and fetched him some towels to dry off); he attacked mounds of ferocious man-eating ants with ant control granuals, raked, cleaned off the deck, and cleaned out the garage. Then he cut the grass in the backyard (I did cut the grass out front). He also broke down and baled lots of cardboard boxes piled up in the garage and helped me haul the recyclables and trash out to the curb for tomorrow's pick-up. As a result, the garage is looking much cleaner and the front, side and backyards are looking much prettier. The first photo is a shot from the front fence (south side of the house) toward the back yard. I wanted to show the beautiful blossoms on the Newport plums and some of the back yard. I got more than I bargained for! Notice the robin in the foreground (just above the front fence pickets). That robin is VERY territorial. He was following Mr. Don around while he cut the grass. At one point when I was out on the deck Mr. Don called to me and pointed and mouthed "look" - so I looked where he pointed and there was the robin, trying to stare down the lawnmower. LOL! About ten minutes later the robin was still hanging around out back as I set up the blue glass birdbath in the smaller flower garden (you can see it in the second photo), and he continued to fly around, cheep-cheeping as we worked outside. 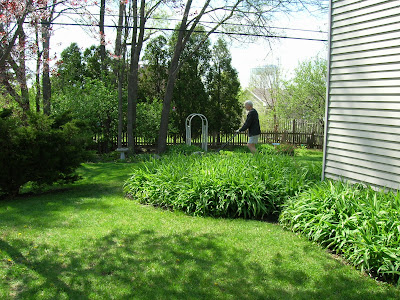 The second photo is a sneak shot of Mr. Don hard at work cutting the grass. Then he turned around and saw me and made faces at the camera. Unfortunately, instead of snapping the photos I hit the on/off button by mistake and the camera shut down. That's what I get. Drat!
Posted by Jan at 8:58 PM