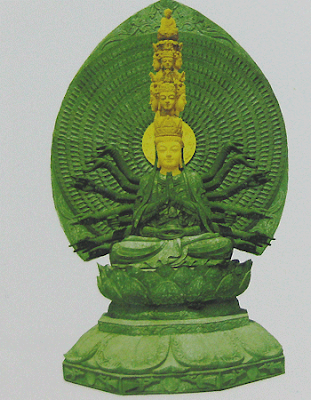 Goddess of Mercy jade statue to visit Vietnam 15:18' 05/01/2010 (GMT+7) VietNamNet Bridge – The giant statue of the Goddess of Mercy, which is made from the largest jade block in the world, will be brought to Vietnam in mid-January 2010. The 1.1m high, 285kg statue is sculpted from the largest jade block in the world in Canada. In 2008, part of this jade block was used to make a Buddha statue of 2.7m high, 4 tonnes in weight. The Goddess of Mercy statue will appear at the Chiang Rai pagoda in Thailand on January 15. It will also appear afterwards at a great celebration held by the Thai royal family in Bangkok. The statue will then be brought to the Quan The Am pagoda in Danang on January 19. From January to April, the statue will go to Hanoi, HCM City, Hai Duong, Nghe An, Ha Tinh and Quang Binh.
Posted by Jan at 8:41 PM