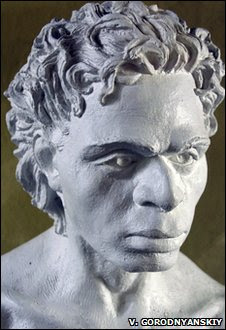 From BBC News DNA analysed from early European By Paul Rincon Science reporter, BBC News Scientists have analysed DNA extracted from the remains of a 30,000-year-old European hunter-gatherer. Studying the DNA of long-dead humans can open up a window into the evolution of our species (Homo sapiens). But previous studies of this kind have been hampered by scientists' inability to distinguish between the ancient human DNA and modern contamination. In Current Biology journal, a German-Russian team details how it was possible to overcome this hurdle. Svante Paabo, from the Max Planck Institute for Evolutionary Anthropology in Leipzig, Germany, and colleagues used the latest DNA sequencing techniques to study genetic information from human remains unearthed in 1954 at Kostenki, Russia. Excavations at Kostenki, on the banks of the river Don in southern Russia, have yielded large concentrations of archaeological finds from the Palaeolithic (roughly 40,000 years ago to 10,000 years ago). Some of the finds date back as far as 45,000 years. The DNA analysed in this study comes from a male aged 20-25 who was deliberately buried in an oval pit some 30,000 years ago. Known as the Markina Gora skeleton, it was found lying in a crouched position with fists reaching upwards and a face orientated down towards the dirt. The bones were covered in a pigment called red ochre, thought to have been used in prehistoric funeral rites. The type of DNA extracted and analysed is that stored in mitochondria - the "powerhouses" of cells. This mitochondrial DNA (mtDNA) is passed down from a mother to her offspring, providing a unique record of maternal inheritance. Using technology pioneered in the study of DNA from Neanderthal bones, they were able to distinguish between ancient genetic material from the Kostenki male and contamination from modern people who handled the bones, or whose DNA reached the remains by some other means. . . . The apparent ease with which modern DNA can infiltrate ancient remains has led many researchers to doubt even those studies employing the most rigorous methods to weed out contamination by modern genetic material. "The ironic thing is that our group has been one of those that raised this issue," Professor Paabo told BBC News. "To take animal studies on cave bears, for example, if we use PCR primers specific for human DNA on cave bear bones, we can retrieve modern human DNA on almost every one. That has made me think: 'how can I trust anything on this'." Using the new techniques, the researchers were able to sequence the entire mitochondrial genome of the Markina Gora individual. Future studies like the one in Current Biology could help shed light on whether the humans living in Europe 30,000 years ago are the direct ancestors of modern populations or whether they were replaced by immigrants who introduced farming to the continent several thousand years ago. . . . . . . What I want to know is - if we cannot rely on any earlier DNA tests because of the evident ease of cross-contamination from modern human DNA, are all of the results from prior DNA dating of ancient (and not so ancient) bones going to be thrown out as unreliable? Somehow - I doubt it; I hope I am proven wrong, but no doubt extensive restesting would prove prohibitively expensive. So, will future text books contain asterisks after certain findings, indicative of questionable results obtained from before this new technique is applied to future finds? By the way, I got a real hoot out of how the artist who did what I assume is a reconstruction of the skull from the Markina Gora skeleton made him look like a Neanderthal! Heavy overarching brow line, uber-large wide nose, wide mouth out of proportion to the rest of the bone structure. Ha! According to currently accepted chronology, Neanderthal man more than likely wouldn't have been alive in that part of the world in 30,000 BCE and it is a controversial idea that Neanderthal buried their dead.
Posted by Jan at 6:50 PM